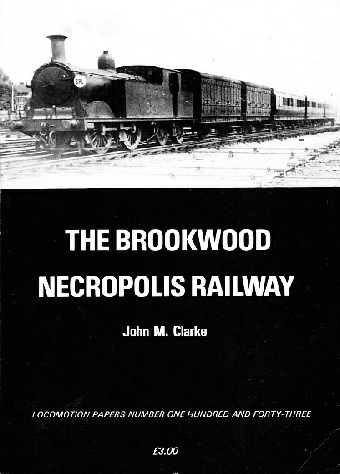 Published by the Oakwood Press, September 1983

Paperback, with 47 pages, and 39 illustrations

Note: this edition has been out of print for many years. It was replaced by the second edition of 1988.

This suitably funereal looking cover is the first edition of my book on the Brookwood Necropolis Railway.

It appeared after considerable difficulties in finding a publisher. One major railway publishing house returned my manuscript with the suggestion that the subject was better served as a magazine article. Four editions down the line I feel I have proved the ongoing interest in Brookwood’s railway funeral service.

Fortunately the late Roger Kidner saw the potential of this project, probably based on his enduring interest in the more obscure and neglected railways of Great Britain which formed the basis of his founding the Oakwood Press in 1931.

This first edition of The Brookwood Necropolis Railway appeared in the old Oakwood Press format of a card cover with the photographic illustrations appearing on art paper as a twelve-page insert in the centre of the booklet. All this was stapled together, and cost £3.00.

Oakwood’s publicity described my book as follows, “The fascinating story of the short branch line from near Brookwood station to the London Necropolis, of the private station at Waterloo, and of the trains for mourners and coffins; many plans and rare photos. £3.00, post 27p.”

The reviews were very generous, and some are reproduced below.

Some reviews of the first edition of The Brookwood Necropolis Railway

“A well-researched account of an obscure subject where material is usually hard to obtain.”

“This is a well-researched account by John Clarke of an obscure subject where accurate material is usually hard to obtain. The acknowledgements at the beginning bear witness to his efforts. He deals with a subject which many would regard as morbid in a sensible fashion, tracing the background to the formation of the Necropolis Company and the development of the London stations and cemetery branch. This history is followed with a description of the operation, notable workings and incidents over the active years of the service. The final chapters cover details of stock and fares.

“Track plans and diagrammatic building drawings are included, although these would have benefited from a larger format. Photographs included are as comprehensive as one could expect fro this subject and give a reasonable impression of the line.

“This book is without doubt one of the best accounts from this publisher for some time, the small subject being well suited to the Oakwood style. Mr Clarke is to be complimented upon his efforts which come across in an unequivocal fashion and should become the definitive work on the subject.”

“A fascinating, if slightly macabre, addition to the Oakwood range of specialist books.”

“Many a traveller south-west from Woking must have wondered about the history of that huge cemetery on the south side of the line and its railway connections. One need wonder no more, for John M. Clarke’s book sets out not only the history of the London Necropolis Company - a thoroughly worthy Victorian enterprise which sought at the same time to relieve the growing pressure on cemetery space in an overcrowded London and make some money out of it - but that of a railway which owned stock and stations at London and Brookwood and ran, for most of its length, on LSWR metals and with LSWR motive power. A fascinating, if slightly macabre, addition to the Oakwood range of specialist books.”

“Mr Clarke …  presents a carefully detailed and most readable account of [this] very special passenger service.”

“One is continually grateful to Oakwood Press for providing valuable specialised railway histories studies which might otherwise find no opportunity of publication. Mr Clarke, who discloses in his preface a mild fascination with death, presents a carefully detailed and most readable account of the very special passenger service operated between Waterloo and Brookwood by the London Necropolis Company from 1854 to 1941, with its dedicated stations and rolling stock.

“The bibliography somewhat curiously mentions Nock’s book on the LSWR but not R. A. Williams’s history which has some reference to the subject. Apart from this and the usual Oakwood omission of an index there is no fault to be found in this most creditable production.”

By Alan A. Jackson In Journal of the Railway & Canal Historical Society (March 1984)

“Fascinating story of the ‘stiffs’ express’”

“There are very few people who realise that a small but interesting part of British railway history emanated from a branch line out of the old London and South Western Railway in the Brookwood area.

“John Clarke has produced a fascinating set of facts and figures, drawings, maps and photographs to delight all interested in railway history, covering as it does the very beginnings of London’s burial problems and the construction of the stations, make-up of rolling stock and even costs of tickets and frequency of service.”

The view from the St Edward Brotherhood

“A booklet has been published outlining the history of the old railway which ran from Waterloo to present site of the Brotherhood at Brookwood. Written by John M Clarke, the booklet is primarily intended for railway enthusiasts, but includes interesting pictures of the South Station which used to occupy our site, and information on the founding of the Cemetery and some of the more celebrated funerals conducted here.”

“I am glad you are happy with the book; it should at any rate be the last word on its subject, and I am sure it will get good reviews.”