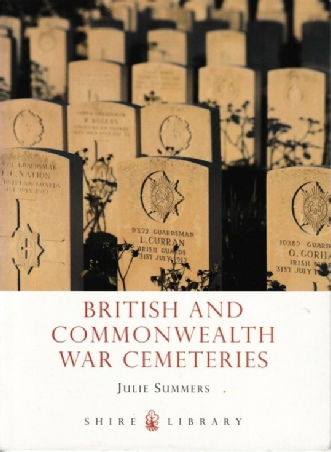 In 1917, a remarkable organisation came into being. Its brief was to commemorate the 1,100,00 men of the British Empire who lost their lives in the First World War. The Imperial War Graves Commission was the creation of one man, Sir Fabian Ware, whose energy and determination brought together some of the greatest designers and architects of the early 20th century.

This book charts the history of the military cemetery. It might have been called “from the Crimea to the Falklands”, as there were no distinct British war cemeteries before the Crimean War and there have been none since the Falklands. In more recent conflicts, all our fallen servicemen and women have been repatriated for burial in the UK.

The book is divided into six sections. The introduction defines a war cemetery and looks at some pre-Crimean burial grounds that include war dead. The second section explores the need for and foundation of the Imperial War Graves Commission, “one of the most remarkable organisations of the 20th century”. It was only as a result of the impact of the First World War that commemoration of the dead became something that was taken so seriously by the public and the military that a suitable organisation was required to build and administer cemeteries and memorials to the missing.

The next section describes the worldwide task of the Commission in creating an international network of military cemeteries commemorating the “glorious dead”. It also defines the qualification for burial in one of these cemeteries (a man or woman had to have been a member of the armed services between 4 August 1914 and 31 August 1921) and why (an Order in Council of that date declared the war as having ended). The design and creation of military cemeteries across the world is described and several are illustrated.

The fourth section covers memorials to the missing and extends the story down to the Second World War. The penultimate section considers the commemoration of the war dead since 1945, reflecting on the close working relationship between the Ministry of Defence and the Commonwealth War Graves Commission. Here the issue of repatriation is discussed, which is now the usual way our war dead are dealt with.

The final section considers the Commission’s ongoing task in a changing world, including the ongoing maintenance of its cemeteries and the creation of the new cemetery at Fromelles.

Shire Books continues to produce attractive, well-illustrated and well-written introductory texts on a wide range of subjects and this title is no exception. Overall I found it an excellent introduction to the work and legacy of the Commonwealth War Graves Commission. There are over 80 illustrations (mostly in colour), covering a wide range of the Commission’s cemeteries. A quarter of these are taken from the Commission’s own archives, including one of the passport issued to King George V when he visited France and Belgium in 1922.

Should you require further detail and even more photographs then I recommend you look no further than Julie Summers’ related work Remembered: A History of the Commonwealth War Graves Commission (Merrell Publishers, 2007). Julie Summers also wrote Remembering Fromelles, the story behind the creation of the most recent of the Commission’s cemeteries in France.