Necropolis: London and its Dead 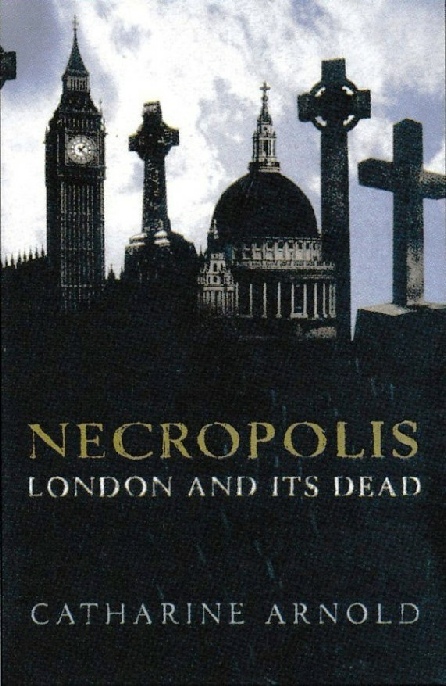 Necropolis: London and Its Dead

This book is an account of London's dead from prehistoric times to the present day. It is an examination of London burials and funeral rites from pagan through to modern times, revealing the metropolis as one giant graveyard, or ‘more necropolis than metropolis'. The book is arranged chronologically. It begins with pagan practices and moves on to the Roman occupation, the Black Death, Medieval and Elizabethan London, the Great Plague, Loudon's ‘Elysian fields’, the burial congestion of the early 19th century, the rise of cemeteries, the movement to bury in the suburbs, the development of cremation, the two World Wars and the decline of mourning. In addition, two further chapters on the Victorian period cover the Victorian funeral and the Victorian cult of mourning.

Arnold’s structure is copied from the more scholarly and comprehensive survey of death in England edited by Peter Jupp and Clare Gittings, even down to finishing with the funeral of Diana, Princess of Wales (Death in England: An Illustrated History, 1999). Arnold is a psychologist and novelist, and this may account for her ‘cherry picking' her way, for the author ranges far wider than the title of the book suggests, and sometimes into irrelevance. For instance, the chapter on cremation includes a three page digression on the desecration of the French royal tombs at St Denis during the French Revolution. It is not clear why this section appears here since it has nothing to do with cremation, still less with London’s dead. There is a similar digression on the history of Highgate (the village rather than the cemetery).

The book is descriptive and chronological, rather than systematic and analytical. The descriptive aspects are by no means comprehensive and leave some remarkable gaps. For instance although there is brief mention of hospital and prison burial grounds, there is no discussion of the death rituals surrounding public and prison executions, and nothing on burials in prisons such as Pentonville and Holloway, despite the evidence of Oscar Wilde’s Ballad of Reading Gaol as a key literary reference. There is little discussion of the later reburials of human remains from crypts, churchyards and burial grounds to the ‘suburban’ cemeteries such as the City of London Cemetery. Arnold refers to Highgate’s 'unique' landscape, but this may be equally applied to other cemetery showpieces such as Kensal Green, West Norwood, or the rural spaciousness of Brookwood. Moreover her coverage of the ‘magnificent seven' metropolitan cemeteries is variable since having devoted much space to Highgate and Kensal Green. Arnold appears to have run out of space with Brompton, Abney Park and Tower Hamlets covered in just six pages. Remarkably the City of London Cemetery appears to be ignored by Necropolis, but perhaps this is explained by Arnold's comment that Brookwood was the ‘last great London cemetery'.

Analytically, why is chapter 9 misleadingly called ‘the people who invented death: the Victorian funeral'? This implies that earlier (and later) Londoners had no funerary rituals, which is clearly untrue. Arnold's quotation of Gladstone (‘show me the manner in which a nation cares for its dead ...’) is used as evidence for the need of burial reform in the 1830s yet might also be employed to reflect on why too many of London’s cemeteries and burial grounds are now neglected and vandalised. Similarly, the author fails to note that the ‘cholera panic' of 1848-49 resulted in legislative action precisely because the disease did not distinguish between rich and poor: the poor may have borne the brunt of the disease but many affluent households were also afflicted, and it was the latter who caused the panic.

Arnold (or her editors) are very inconsistent on a number of references which gives the impression the book was completed in a hurry. Thus we have Dr Julian Litten first presented in the text in the abrupt form ‘Litten’ (p.79), but on the following page as ‘Dr Litten'. The footnotes are also curiously compiled, which is likely to prove frustrating for the interested reader. For instance, in her discussion of the development of London’s greatest cemetery, at Brookwood in Surrey, Arnold fails to directly reference the only major source which the reader must endeavour to extricate from the bibliography. (London’s Necropolis: A Guide to Brookwood Cemetery by John M. Clarke, 2004). Arnold has also liberally used references to websites without clarifying to what they refer or what their context is. This is particularly true of chapter 12 where the internet appears to be a major source of reference. and which adds to the impression of haste. Arnold has also failed to include some recent works which are worthy of mention in her book, not least The London Way of Death by the Funeral Service Journal editor and more recently his Committed to the Cleansing Flame: the Development of Cremation in Nineteenth Century England.

The publishers have produced a moderately priced book. There are few illustrations, all black and white, generally just one per chapter, and printed alongside the text. More could have been included, especially since Jupp’s survey includes an enormous range, including several in full colour. The endpapers include a useful map of 1880s London, which in fact shows the locations of several burial sites in central London. Necropolis may well appeal to a popular audience, including as it does many grisly descriptions of past practices. But the more interested reader may find this a frustratingly disconnected journey through time and geography. For these readers your reviewer would recommend instead Death in England, which is more comprehensive and compiled by noted experts in each of its time zones.