Police Sergeant Leonard Carter, of A Division, Metropolitan Police, was killed on duty on 5 August 1927. 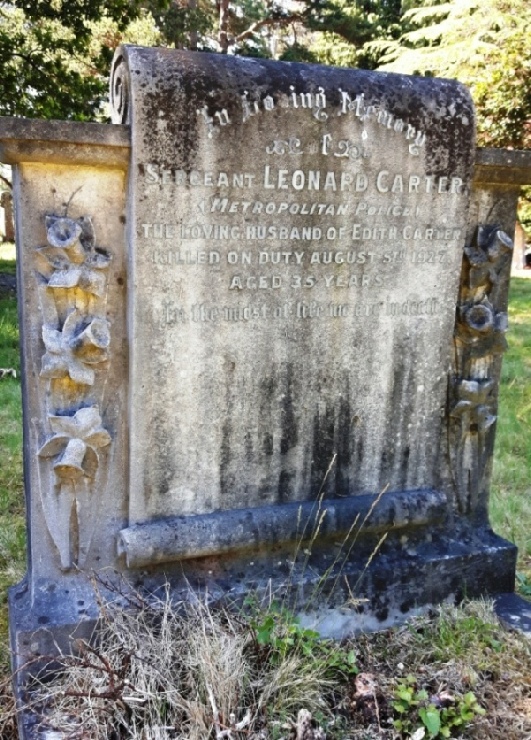 In company with other policemen, Carter was searching the ground floor of a building in course of construction in Pall Mall East, for a man who was understood to be on the premises when he fell 50 feet through a hole in the floor and was killed. The building was being erected by Messrs. Trollop and Colts for the Sun Life Assurance Company of Canada.

The inquest was held on 8 August, when it was reported that a patrolling policeman had noticed that a door in the hoardings surrounding the building site was open. The matter was reported to Sergeant Carter, who called two other officers, and together they began a search of the premises. During the course of their search, Carter stepped into a hole in the floor of a room on the first storey and fell 50 feet into the basement. Inspector Thomas Corp said that he heard a loud crash, and they proceeded to the basement. They found the Sergeant lying in a pit about eight or ten feet below the basement. There was a hole above, which was protected by iron bars at intervals. Near the edge were some loose stones and pieces of wood, and, in his opinion, the Sergeant got awkwardly on one of these pieces, and there were marks as though some one had slipped.

After the accident several attempts were made to reach the sergeant, and eventually the fire brigade were summoned. A fireman was lowered into the basement and attached a rope to the sergeant, who was then pulled up. He was found to be dead. The hole into which Sergeant Carter fell was used as a shaft and extended 10 or 12 feet below the pavement level.

The inquest returned a verdict of accidental death.

Sergeant Carter had only recently been promoted to the rank. He was married with 15 years’ service in the Metropolitan Police.