Corporal Frederick Edmon Channell was killed by the Army 12 stone champion in a tragedy at Sittingbourne. 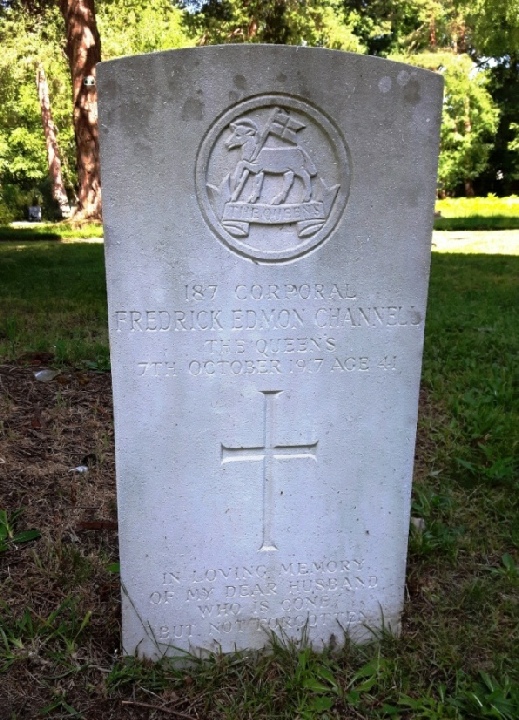 The tragic events of Corporal Channell’s death took place on the evening of 7 October 1917. Three soldiers, walking from the “King’s Head”, Chalkwell, Milton, towards Sittingbourner, after closing time, were singing and making a noise on the way. Corporal Channell, of the Queen’s Royal West Surrey Regiment, who was accompanied by two civilians, spoke to the men and asked them to stop their noise and go home quietly. One of the three soldiers, Private William Mahurter, of the Transport Workers Battalion, Bedfordhsire Regiment, who was working at Ridham Dock, resented the Corporal’s action, and spoke to him about it. A few words passed - spoken in quite a friendly way, as some of the witnesses described it - and then Mahurter, who was 24, and of powerful build, struck the Corporal a terrible blow on the face, knocking him down. The Corporal’s head struck an iron manhole cover in the road, fracturing his skull. The unfortunate man never spoke or moved after he fell. Corporal Channell was taken to Glovers Hospital, and died there a few hours afterwards, never having regained consciousness.

Corporal Channell, who was 40 years old, was a Woking man, and had been with the Queen’s Regiments ever since the battalion was based at Sittingbourne. He was the son of William Channell of Chapel Grove, Addlestone; and husband of Margaret Amy Channell of West Street, Woking. He was the father of eight children. In civilian life he was a coal carmen.

Private Mahurter gave himself up to the police and was placed under arrest. An enquiry into the whole incident took place before the County Coroner, Mr c. B. Harris, and a jury on the following Tuesday afternoon (10 August) at the Sittingbourne Police Court. At the conclusion of the inquest the Coroner reviewed the evidence for the benefit of the jury, the main points to consider being first, were they satisfied that Corporal Channell came to his death from haemorrhage of the brain, caused by a fall as the result of a blow? Secondly, if they were of the opinion that Mahurter gave that blow, and if they came to the conclusion that it was Mahurter’s intention  to do the deceased grievous bodily harm , that would be murder. On the other hand, if they thought the deceased came to his death as the result of a blow given in irritation, in consequence of having been checked - the jury remembering that there had been an interval between the time that Mahurter was stopped and the blow struck - then it would be manslaughter.

After a lengthy consideration, the jury returned to the court and returned a verdict of manslaughter, and Mahurter was committed to the Kent Assizes for trial.

William Mahurter’s trial was heard at the Kent Assizes on 30 November 1917. He admitted he was drunk at the time of the incident, having been drinking rum during the course of the evening. His counsel told the court that he had been fighting in France and had been wounded several times. He had a good character in the Army. Mahurter was sentenced to six weeks’ hard labour. One local newspaper headline noted “RUM DID IT - SOLDIER’S LIGHT GET OFF”.

OF MY DEAR HUSBAND