Brookwood Cemetery: A Journey Through Time

My earliest recollection of the cemetery dates back to about 1970. One summer’s evening my Uncle Bill, who was a stonemason, took us to Brookwood for a look round. There are only two things I can remember: running around a white wooden building, and an enormous cedar tree nearby. When I re-visited the cemetery during 1976, I soon discovered the tree - it was facing the platform of South Station.

I became interested in Brookwood Cemetery in 1976. It was by sheer accident. Whilst studying for my ‘O’ levels, my Mother suggested I visit the Military Cemetery in order to form some impression of the incompre-hensible numbers that fell during World War I. Having explored the sections of uniformly ranked headstones, I wandered off into the ‘civilian’ Cemetery and chanced upon the brick platform of North Station. I thought this feature quite incongruous - most certainly bizarre - and therefore I went to the Cemetery Office, which was then located by the main entrance to the Nonconformist section, for more information. I was supplied with a map of the cemetery that clearly showed the route of the private railway. Subsequent visits to the cemetery allowed me to photograph the route through the grounds and to measure up the site of South Station (now part of the St. Edward Brotherhood). The station’s foundations were still quite visible as the premises had only been demolished some 3 or 4 years previously, following a disastrous fire.

Back in the spring of 1976 there was very little published on cemeteries, and it was very difficult to trace information. There was no interest in the history of the cemetery, little interest in the history of Woking, and an apparent aversion to anyone even remotely interested in death or cemetery studies. The only really useful book I came across was James Stevens Curl’s The Victorian Celebration of Death. This fascinating volume helped develop my interest.

My curiosity surrounding the railway was only partly satisfied by a short article, “Via Necropolis Junction”, which had appeared in The Railway Magazine in 1973. It included two useful photo-graphs of South Station, but served only to prove how little was known about the funeral trains, and how errors from one source tend to get repeated and passed on. 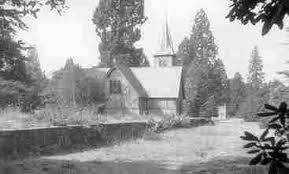 One of the first photographs I took at Brookwood showing the site of South Station in August 1976, before the St Edward Brotherhood acquired the site.

Further work on the story of the Cemetery railway had to be squeezed in and around studies for my ‘A’ levels and University. I wrote many letters, most of which produced no substantial information, but I began to establish a number of useful contacts who pointed me to relevant photographic libraries (usually private ones) and other sources of information.  In my year between 6th Form College and University, I undertook further research into the Cemetery and its railway, and I was very fortunate to continue this work in my final year at University for my dissertation Cemeteries in Conflict: the Disposal of the Dead in Nineteenth Century London 1849 - 1854. My supervisor was Dr (now Professor Sir) David Cannadine. This provided the core of what became Chapter 1 of my book The Brookwood Necropolis Railway, which appeared in its original form at the end of September 1983.

The appearance of my book resulted in contact with a range of hitherto unknown individuals who were happy to share their knowledge of the cemetery railway, and sometimes accompanied by photographs.  It also resulted in a number of invitations to lecture on the cemetery railway which provided a further opportunity to advertise its existence and possibly glean new information from the varied audiences who invited me to speak. Therefore, when the original booklet sold out, I pressed the new owners of Oakwood Press to publish a further edition.

Thus, the 2nd edition of The Brookwood Necropolis Railway appeared in November 1988. This version was much closer to my original vision for the book, but it had only been possible through the generosity of those individuals who had contributed substantially to my knowledge of the railway funeral service, all of whom are listed in the book’s preface. For the record, the original edition appeared with just 47 pages and 24 photos, whilst the 2nd edition was expanded to 96 pages and 46 photos. (The current edition has 192 pages and 115 illustrations.) As an aside, bibliophiles and local historians may relish my error in the caption to the engraving of the proposed London Necropolis and National Mausoleum where I described Woking as a city. Needless to say, this mistake was subsequently rectified!

In 1989, my friend Iain Wakeford, invited me to contribute to his first Woking History Festival. This followed on very conveniently from the “Woking 150” celebrations of 1988 which commemorated the opening of the original station at Woking in 1838. During that Easter weekend, I gave a lecture on the cemetery railway and led two walks around Brookwood Cemetery. The interest in these very first guided walks was astonishing. Over 150 people joined them and, as we had not anticipated this level of interest and so had no megaphone, many of my comments had to be repeated (or rather shouted) so that everyone could hear. In addition to the Festival walks, over 700 people attended the two-day Woking History Festival exhibition.

A similar response occurred in 1990 when my lectures were expanded to include some of Brookwood’s famous “residents”, a look at the cemetery today, and how to do research. The History Festival exhibition was extended to cover three days, whilst the associated programme of walks actually lasted over a period of ten days around the main Easter weekend.

In 1991, I was invited back again and opened the third Woking History Festival with a talk on the cemetery railway. This took place in the Brook-wood Memorial Hall and a glass of “Hook Heath” wine was included as part of the admission charge.

During these History Festivals, my main interest in the cemetery was developing from just the railway to the cemetery’s history and the people buried there. This was reflected in the lectures and walks that I undertook at this time. I should add that all those involved with the History Festival were unpaid volunteers and that any “profits” went to cover the necessary overheads involved in organising the festival; to assist in funding the next Festival; and to help promote the worthy cause of a proper Museum for the people of Woking.

By the end of 1991 I was in touch with Mary Lucas who was to be instrumental in the founding of the Brookwood Cemetery Society. In collaboration with Iain Wakeford and (initially) Martin Humphreys, we decided to launch the Society during the 1992 Woking History Festival. 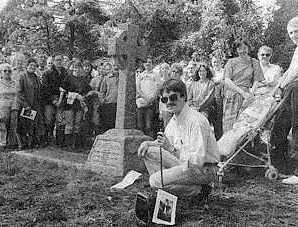 “John Clarke leads his tour of Brookwood Cemetery on Easter Monday [1992]. Here he points out the grave of Alfred Bestall, the artist who drew the Rupert Bear cartoons for many years.”

Behind the scenes, Mary and I (with Arthur Storie, who did the photo-graphy) had been working hard on the text and content of what became An Introduction to Brookwood Cemetery. This was sponsored entirely by Mr Ramadan Güney, who also undertook almost the entire production costs of the postcards. The Introduction suffered from being written and produced in great haste, but it continued to sell steadily for the Society.