The “Missing” Muslims From Horsell Common

I have been assisting Tharik Hussain and his team researching into the history and heritage of Woking Mosque. One of the projects Tharik is working on is a “Muslim Trail” at Brookwood Cemetery.

Plot 2A in the Military Cemetery contains only 24 of the Muslim soldiers previously buried in the Muslim Cemetery on Horsell Common.

Recently I was contacted by Tharik following one of his visits to Brookwood. He had been checking the location of graves for his “Muslim Trail”. In particular he had visited Plot 2A in the Military section where the reburial of Muslim soldiers from the Horsell Common burial ground (now known as the Peace Garden) took place in 1969. The reason for their removal to the Brookwood Military Cemetery was due to vandalism at the Horsell Common site, and fears by the Commonwealth War Graves Commission (CWGC) and other authorities that unless the soldiers were moved to Brookwood, further desecration of these war graves might take place.

But Tharik’s question did not concern the reasons behind the removals, but the number of graves he had found in Plot 2A.

For up to now, everyone (myself included) had assumed that all 27 soldiers buried in the Horsell Common burial ground had been reburied in this plot. Tharik’s visit had prompted two interesting questions: why did Plot 2A contain only 24 graves?, and what had happened to the other three soldiers?

The mystery deepened when I checked the CWGC website to see if this would shed any light on matters. It didn’t, since the “missing” three names did not appear on its search engine. This suggested either that for whatever reason they had been left out of the CWGC database (which seemed unlikely given their former burial place); or, for whatever reason, they did not come under the aegis of the CWGC.

I turned next to list of soldiers recorded at the Horsell Common site, now of course re-branded the Peace Garden. This revealed the correct total of 27 soldiers, which was also confirmed by the cemetery records, meaning that the other three soldiers must be at Brookwood.

The list also revealed that the “missing” three were much later burials – all from the Second World War rather than the First World War – and that they were all French.

I therefore turned next to my copy of The War Dead Other Than of the Commonwealth: Brookwood Military Cemetery (Maidenhead: CWGC, 1977) which confirmed that these three combatants of the French Foreign Legion were not buried in Plot 2A in 1969 but in the Free French section. Two were buried together (Mohamed Ben Hamou and Mohamed Ben Tahar at Plot 29-A-11 and 29-A-12) and the other nearby (Ibrahim Yolkoff, 29-A-17). 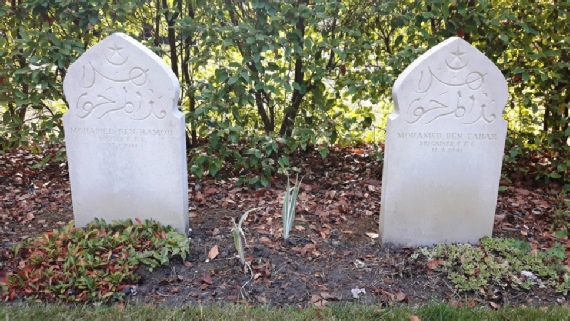 The graves of Mohamed Ben Hamou and Mohamed Ben Tahar in the Free French section of the Brookwood Military Cemetery.

Tharik was pleased to have the whereabouts of these three Muslim soldiers confirmed for his “Muslim Trail”. He also commented that it was as though nobody was publicly aware that three of the soldiers in the original Peace Gardens were French. This was true of Zafar Iqbal who has been instrumental in the Peace Garden project and was closely involved in the official opening ceremony in November 2015. As a result of Tharik’s enquiry Zafar Iqbal has updated the information sheet concerning the names and regiments of servicemen originally buried in the Muslim Burial Ground, Horsell Common, Woking.

However this does leave a further question. Why were these three French nationals buried on Horsell Common in 1941 and 1945 at all? For by this time the military sections at Brookwood were being augmented by Second World War dead, including the massive expansion of the American section. This is particularly true of the burial of Ibrahim Yolkoff. At the time of his death, in August 1945, American burials at Brookwood had not taken place for a year, due to the American authorities using Madingley in preference to Brookwood. Hence there was clearly land available in the military sections for him to have been buried there.

What actually happened is that the American authorities decided that Madingley would become the burial ground for American war dead in Britain, and the American soldiers buried at Brookwood were exhumed in 1948. Subsequently arrangements were made with the French authorities for the creation of the Free French section at Brookwood which in fact uses land previously used for American burials. The Free French section was formally opened towards the end of 1953. However for whatever reason, at this time the three French soldiers were left in peace on Horsell Common. It was only with their removal in 1969 that they were moved into the Free French burial ground.