This page posts news and comments about my continuing research into Brookwood Cemetery and related topics.

Lecture for the Dickens Fellowship - (26 February)

The Reburial of Edith Thompson (8 April)

Lecture for the Hampton WI (13 May)

“Days Out” in the Daily Telegraph (30 November)

It was a pleasure to give a lecture on “London’s Necropolis Railway” to a packed meeting of the Dickens Fellowship on the evening of 26th February.

The Reburial of Edith Thompson

The reburial of Edith Thompson at the City of London Cemetery has been shown by the BBC in episode one of its new series Murder, Mystery and My Family: Case Closed?

In the programme, barristers Jeremy Dein and Sasha Wass look back at their examination of a tragic case of love, infidelity, and murder - the conviction and execution of Edith Thompson. 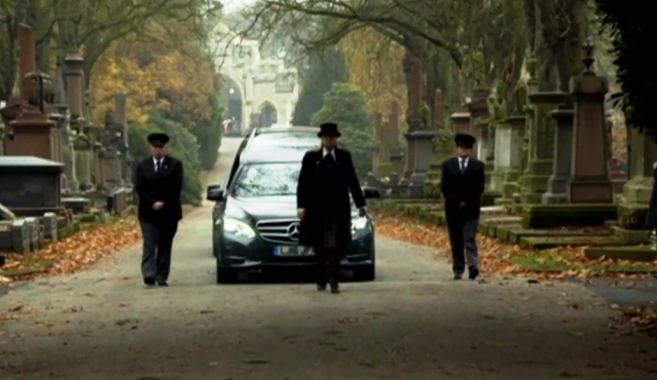 The hearse en route to the chapel at the City of London Cemetery, 22 November 2018

In 2017 Edith’s cousin Nicki Toay questioned the safety of Edith’s conviction. How much did Edith really know about her husband’s brutal murder at the hands of Freddy? Did her infidelity influence the minds of the 1920s judge and jury?

Now it’s nearly a year on from their investigation, and the barristers catch up with Nicki to find out what’s been happening in her life since the judge delivered his verdict. She brings them the incredible news that one of Edith’s mother’s last wishes has finally been fulfilled, nearly one hundred years after her daughter was hanged.

My comments on the original programme can be read here.

The 2019 Historical Lecture Series at Frederick Paine’s Kingston has just been announced. 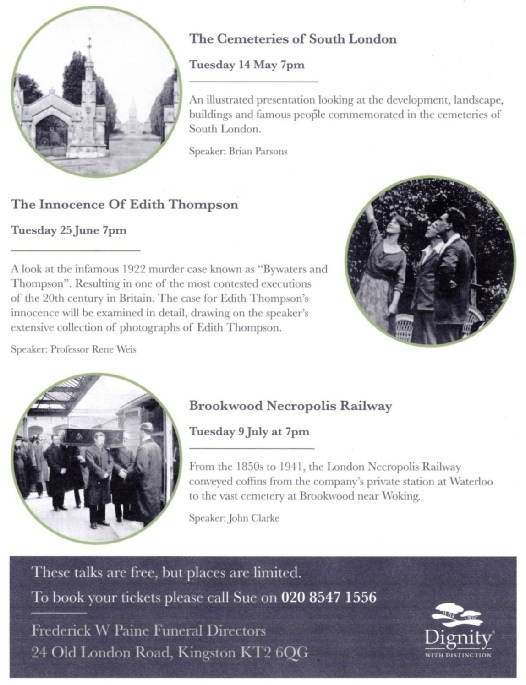 Lecture for to the Hampton WI

It was a pleasure to give my lecture on “The Brookwood Necropolis Railway” to the Hampton WI on the evening of 13 May. There were lots of interesting questions and I left them with a copy poster for the forthcoming historical lectures at Frederick Paine’s (see panel above). 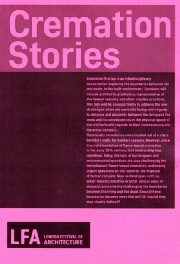 This led to a general discussion on the themes raised, allowing further exploration of the challenges cities are currently facing with regards to the distance and proximity between the living and the dead. Refreshments were served before and after the presentations, and thanks are due to F W Paine for making their premises available for such an interesting evening. 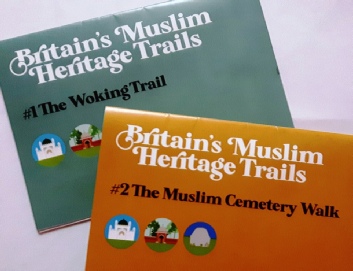 It has been a real pleasure being involved with this important project to promote the importance of the Shah Jehan Mosque at Woking and the Muslim Cemetery at Brookwood Cemetery.

We then moved on to Brookwood Cemetery when another ribbon cutting ceremony launched the second trail (The [Brookwood] Muslim Cemetery Walk) along with the blue plaque near the Kibla stone. 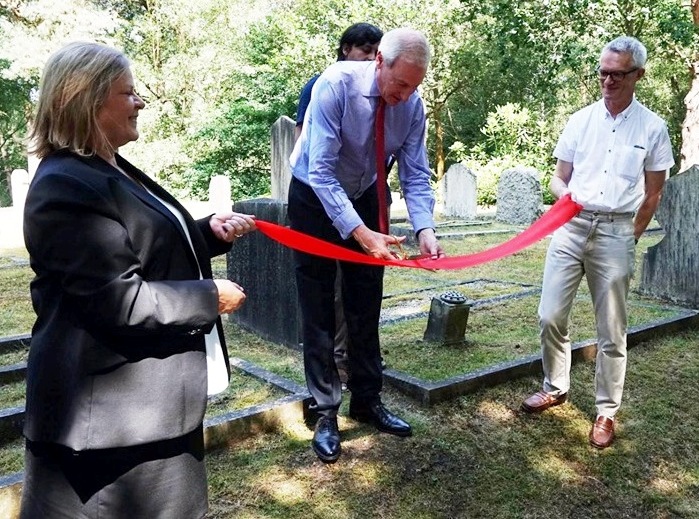 Unveiling the blue plaque at the entrance to the Muslim Cemetery: Left to right: Avril Kirby (Cemetery Manager), Sir Laurie Magnus (Historic England) and myself.

The first trail (#1 The Woking Trail) begins at the “Mecca of Europe” - the Shah Jehan Mosque before moving on to the nearby Horsell Common where in 1915 the Woking Muslim War Cemetery became the final resting place of 27 Muslim soldiers. 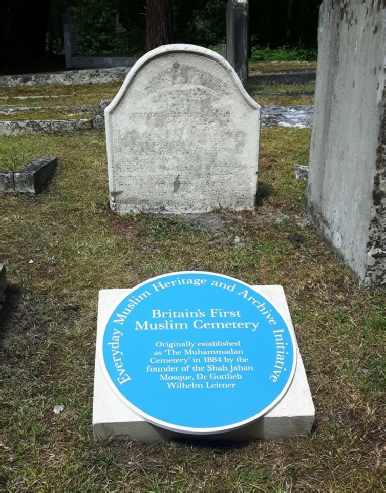 The second trail (#2 The Muslim Cemetery Walk) starts at the oldest Muslim plot in the country. The Muslim Cemetery is the final resting place of several famous late Victorian converts to Islam including Abdullah Quilliam (Britian’s first Sheikh ul Islam), Lord Headley (co-founder of the Woking Muslim Mission), Marmaduke Pickthall (translator of the most famous English Quran) and Sir Archibald Hamilton (convert, and a royal by blood). This trail was developed because Brookwood Cemetery has such a large number of fascinating Muslim residents that it was necessary to create its own walk.

The blue plaque in the Muslim Cemetery reads:

”Everyday Muslim Heritage and Archive Initiative: Britain’s First Muslim Cemetery. Originally established as “The Huhammadan Cemetery” in 1884 by the founder of the Shah Jehan Mosque, Dr Gottlieb Wilhelm Leitner.” It stands in front of the original Kibla stone, erected to mark the purpose of the plot in 1884.

Copies of the trails can be downloaded from the Everyday Muslim website. A two-page article describing the project in full appeared in The Times dated 25 July 2019. 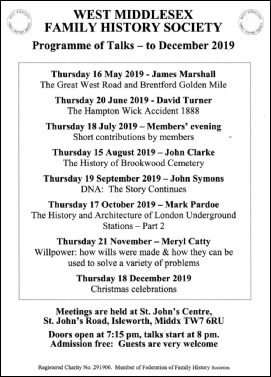 It was a pleasure to give a lecture on “The History of Brookwood Cemetery” to members of the West Middlesex Family History Society on the evening of 15 August.

There were many interesting questions prompted by my talk and I look forward to a return invitation in due course. 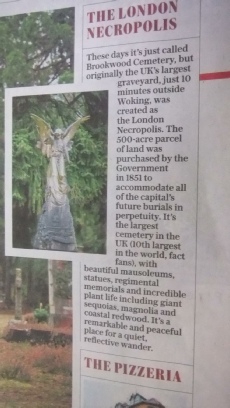 “Days Out” in the Daily Telegraph

The “Days Out” section in the Daily Telegraph dated 30 November included a small panel about the London Necropolis.

It’s a shame Jack Rear didn’t do any research for this as it contains several inaccuracies which should not have been permitted to go to print.

Don’t journalists do any research nowadays?

During the weekend of 21-22 September I supported Open House London by assisting showing visitors around the Frederick Paine Funeral Museum in Kingston. This is the third year it has been included in Open House London. Details of the first year’s opening are posted on my 2017 news page. 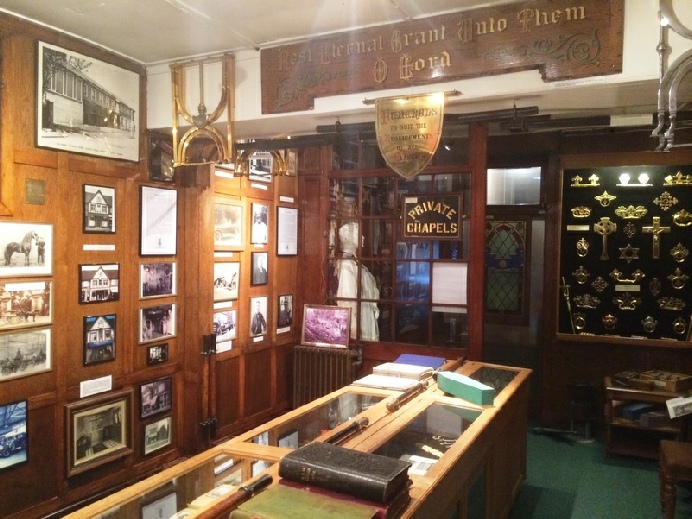 Virtually the entire ground floor of the F W Paine premises was on view, including the museum area, shown above. The interior, which is panelled oak throughout, dates from 1908 and is now listed Grade II.

Restoration of the Colquhoun Mausoleum 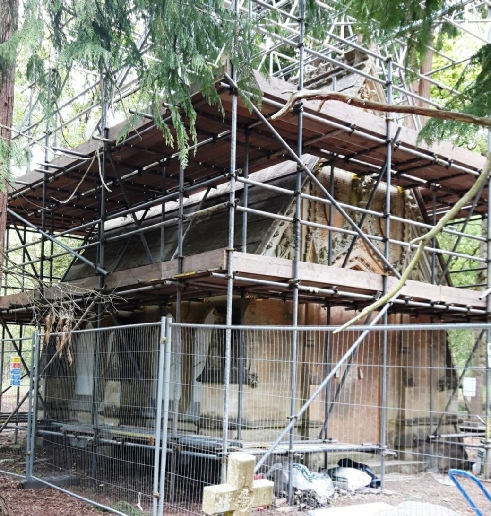 in mid-April. It is planned to continue for some sixteen weeks through to the summer.

The structure, which stands in an isolated location towards the far end of St Mark’s Avenue, has been inspected and a schedule of repairs and refurbishment work has been provided by Priory Heritage Ltd. A specialist company, Sally Strachey Historic Conservation, will carry out the work. This will involve repairs and cleaning of the stonework, repairs to the internal decoration, drainage of the underground burial vault, restoration and repairs to the iron boundary fence, and creating a pathway from St Mark’s Avenue.