Committed to the Cleansing Flame 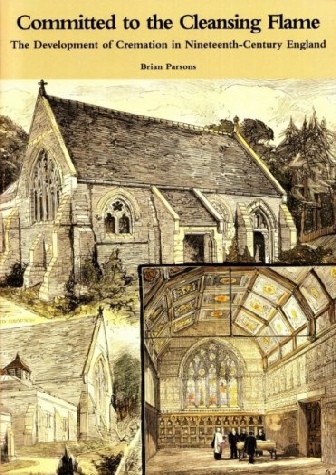 Committed to the Cleansing Flame: the Development of Cremation in Nineteenth Century England

This book is the first history of the early years of the Cremation Society and of its struggle to establish the first crematorium in modern Britain at St John’s, near Woking. However the author has quite properly chosen to continue the story through to the passing of the 1902 Cremation Act that finally and fully endorsed the legality of cremation as an alternative method for the disposal of human remains. It is remarkable that a book like this has not been produced before (perhaps in 1985 to commemorate the centenary of the first cremation in modern times?). Given the author’s diligent and wide-ranging research, it is hardly surprising that he has at the same time managed to offer a number of new interpretations concerning the early history of Woking Crematorium.

The book comprises six main chapters. Chapter 1 describes the background to the cremation movement and the foundation of the Cremation Society by Sir Henry Thompson in 1874. Chapter 2 looks at the struggle to obtain a suitable plot of land for the crematorium and the opposition to this, the design and construction of the furnace, and the case studies of three private cremations in Dorset and in Wales that resulted in the first cremation taking place at Woking in 1885. Chapter 3 describes the first decade of cremations including the undertakers involved, and systematically reviews early cremations by the coffins used, transportation to Woking, costs, what happened to the ashes, and the documentation used. Chapter 4 investigates the development of the Woking Crematorium from its basic furnace of 1885 through to the current complex of buildings and gardens of today. Chapter 5 discusses a number of issues which dogged the Cremation Society in its early years including the choice of undertakers, the somewhat paradoxical support of the London Necropolis Company (LNC), the “earth to earth” movement promoted by Sir Francis Seymour Haden, and the ecclesiastical controversy surrounding Lord Ely’s cremation in 1889. Chapter 6 concludes by describing the further development of the cremation movement in Britain down to 1902. It includes discussion of the continuing arguments over the value of cremation, the opening of other crematoria, and the opening of Golders Green Crematorium. Valuable appendices list the numbers of cremations at Woking 1885-1909, the legal opinion behind the opposition to the foundation of the crematorium at St John’s, open air cremations at Woking, the story of Mrs Pickersgill’s ashes, and notable people who have been cremated at St John’s. In addition, the book is illustrated throughout with a series of wide ranging and well researched illustrations which are a great credit to the author and add much to the value of the book.

A number of assumptions about Woking Crematorium are overturned by this book. For instance it is now clear the Directors of the LNC knew that the land they sold at St John’s would be used for the site of the crematorium. What is less clear is why they insisted otherwise in public; and why Julian Larkman, for many years Secretary to the LNC, continued to oppose cremation even when the LNC was actively working with the Cremation Society! (None of this duplicity is recorded in the official minutes of the LNC.) Alan Crosby’s description [in his History of Woking] of the original crematory buildings is neatly demolished by the fact that this structure was never actually built, for between 1885 and 1889 the “crematorium” comprised just the furnace and chimney. Finally appendix 4 provides a definitive account of the fate of Mrs Pickergill’s ashes, the first person to be cremated at Woking (and they are not interred in the family vault in Barnes Common Cemetery!)

Overall I cannot praise this book highly enough, since it provides as complete a picture as is possible of the early history of the cremation movement in modern Britain. That this story is centred so closely around Brookwood Cemetery is no accident. I am sure the Cremation Society must be delighted that this history has been compiled by such a gifted writer as Brian Parsons.