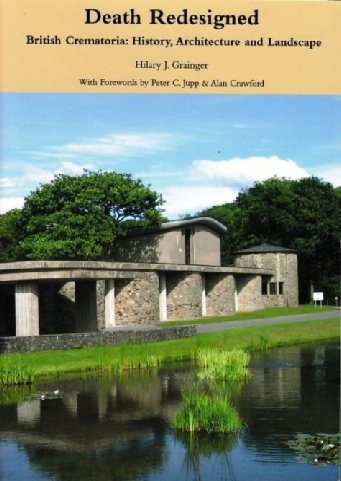 This book completes a cycle of four ‘firsts’ for the history of cremation: The Encyclopaedia of Cremation, Committed to the Cleansing Flame, From Dust to Ashes, and now, Death Redesigned.[1] As Peter Jupp rightly states in the foreword, this book provides ‘an account of the development of cremation in the United Kingdom from the unique perspective of the architectural historian’. As such ‘it extends enormously our knowledge of the shift from burial to cremation in this country’.

The book has two introductory chapters setting the background to the story of cremation in modern times and how architects strove to deal with the demands of this process of disposing of the dead. Grainger includes discussion of the architectural solutions in Europe and America down to 1915. These chapters are followed by others describing the development of crematoria down to the present day. For it is a remarkable fact that more than half the crematoria in Britain (147) were constructed between 1950-1970, a period which also signalled the triumph of local authority control of crematoria. The expansion of the new ‘landscape for mourning’ is explored in its own chapter, followed by a final discussion of the final designs of the past 20 years. Of these 49 crematoria, 28 are privately owned. The book concludes with a comprehensive and unique 140 page gazetteer of all crematoria in the UK with notes on their architects, design and setting.

Grainger observes that crematoria pose a peculiar challenge to architects, since they are ‘ambiguous and evasive buildings … utilitarian and symbolic, religious and secular’. Moreover, in this country, crematoria are usually regarded as places where a body may be burned after a religious service (which often takes place elsewhere), rather than the focus for both the ceremony and the disposal of the dead (as in Sweden). The study of crematoria has therefore been shunned as ‘unpopular’, and even the architectural press described them ‘spasmodically’. Remarkably the only major architectural study prior to this was published as long ago as 1904, and whose architect author had yet to design a crematorium! [2]

Grainger describes the main stages in the development of crematoria designs with a discussion of the architectural trends followed by an analysis of the styles, structure and composition of the crematoria. Some of the important themes identified include the opening of Golders Green as a ‘key moment’ for crematoria design; that the value and potential of crematoria to local government was established before 1939 (21 crematoria opened in the three years preceding the Second World War); the trend to establish crematoria in their own dedicated site and setting, resulting in their greater impact on architecture and landscape design; that the 1950s constructions were far from ‘dull and homogenous, impersonal and bland’ (and why); and the evolution of the single route through the crematorium rather than using the same door as entrance and exit.

This architectural survey and celebration of our 251 crematoria is unparalleled. Throughout its 502 pages of text, Grainger guides us on a fascinating investigation of this ‘uniquely modern building type with no architectural precedent’. Its price should not deter for it is extensively illustrated with photographs and architectural drawings which reinforce and complement the text. Highly recommended.

[1] Douglas Davies and Lewis Mates (Eds) The Encyclopedia of Cremation (Ashgate, 2005); Brian Parsons Committed to the Cleansing Flame: the Development of Cremation in Nineteenth Century England (Spire Books, 2005); and Peter C. Jupp From Dust to Ashes: Cremation and the British Way of Death (Palgrave Macmillan, 2006).