Memorials for Restoration in Brookwood Cemetery

A List Compiled in 2000 for Evidence Submitted to the House of Commons Select Committee on the Environment, Transport & Regional Affairs

This list was jointly submitted by R. H. Guney (then owner of Brookwood Cemetery) and John Clarke (then Chairman of the Brookwood Cemetery Society) in October 2000. It was submitted as part of a Memorandum of Evidence submitted to the House of Commons Select Committee on the Environment, Transport & Regional Affairs.

The wide-ranging report covered the value of cemeteries, cemeteries in decline, causes for concern, halting decline, and reviewing current legislation. The report addressed the cultural value of cemeteries, their value to the environment and the local community, and their role in “urban renaissance”. The report made valuable comments and recommendations on the ways in which cemeteries may be better funded and maintained, principally via English Heritage, the Heritage Lottery Fund, and the New Opportunities Fund. These recommendations cover both local authority and privately owned cemeteries.

Since the Committee’s report was published, a number of monuments and mausoleums in the cemetery have been listed. These are noted below, but additional information on the listed monuments may be found here.

The Glades of Remembrance: the Lake 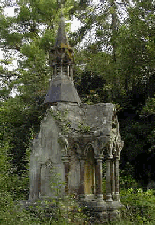 Gothic-style gabled and lanterned memorial. Apparently constructed of Bath stone, this has badly weathered in recent years and much of the memorial is incomplete. It requires extensive reconstruction. Photographs exist showing how it used to look. 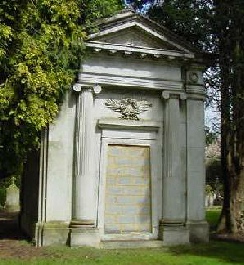 Fine classical-style building. The bronze door (now hidden due to vandalism) includes a relief of Christ as the good shepherd. The roof needs attention and the glazing (at the rear) is broken. 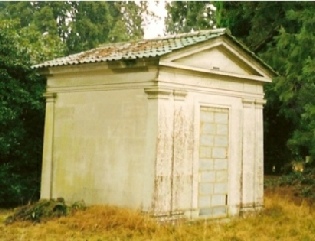 This mausoleum has an attractive green pantiled roof and is constructed of marble(?) The bronze door (now hidden) has a 1930s style domestic front door. There was a circular stained glass window at the rear, which is almost certainly broken. 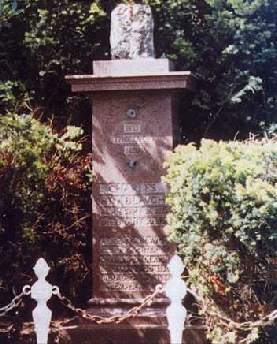 This was the first public memorial to Charles Bradlaugh (1833-1891), a prominent 19th-century politician and the first atheist to be elected as an MP. It has been incomplete since c1938 when the bronze bust (by Francis Verheyden) was mysteriously removed from the memorial. It has never been traced. A bronze wreath, which was affixed to the front of the plinth, has been removed in more recent times. Photographs and postcards are known of the memorial in its complete form, and the National Secular Society may have some information on this, although their premises were bombed in the last war. 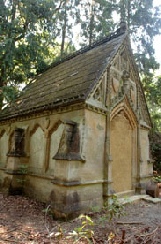 Probably the earliest mausoleum in the cemetery. It may have been designed as a chapel of ease before use by this family as a private chapel and burial ground. The chapel was last restored in 1924 (see inside building). The structure includes fantastically fine carved figures of knights in armour on the exterior gable ends. The floor has partly given way, the doors are incomplete, and the burial vault is prone to flood in winter. Requires extensive restoration and repair. 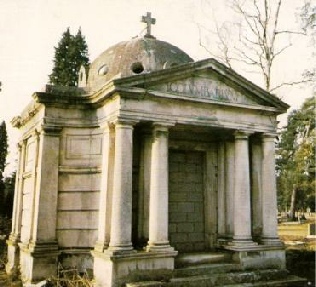 The largest mausoleum in the cemetery. Built originally for the 5th Earl Cadogan (died 1915), it was sold back to the Necropolis Company in 1910 and then converted into a columbarium. In desperate need of major repairs to the dome and roof. Inside, there is an underground vault which is prone to flood in winter. 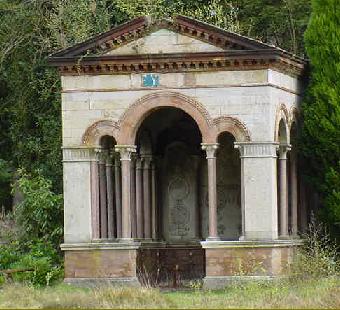 Italianate style building. The roof requires complete rebuilding and the barrel vaulting over the structure is suffering from water penetration and will collapse in time. Bronze plaques on the rear wall have been stolen over the years—these recorded details of the family buried blow. The mosaic frieze (“Because I Live Ye Shall Live Also”) was executed by the Salviatis (see below). The pathway leading to the mausoleum from St George's Avenue might also be repaired. Its boundaries were marked by small granite stones set in the ground, some of which survive.

Of massive construction, this structure would require its boundary hedge being trimmed back and the door being restored. It is not known if there are any stained glass windows to the structure, nor is the state of the interior known. 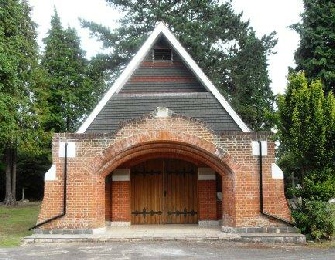 Although the original design was burned down in about 1990, the structure has been repaired and restored, and the building continues in use as the cemetery chapel.

The most recent fitting to be added is the marble altar from the former St Alban's retirement home at Tankerton in Kent. 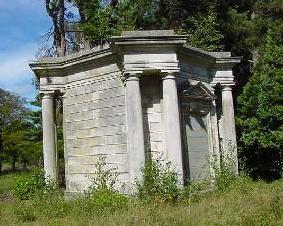 The door (probably wooden) and glazing requires attention, and also the roof. There is a very similar mausoleum near the entrance to the “new” part of Highgate Cemetery, although that design was constructed in pink granite.

GLADES OF REMEMBRANCE: THE LAKE

The Glades were officially opened in 1950 and the lake has always formed a prominent feature of the entrance area.

The lakeside area has now been fully restored and replanted. It might be possible to bid for the drainage channels to be cleared and repaired (e.g. the bridge over the ditch at the end of the main area of the Glades). 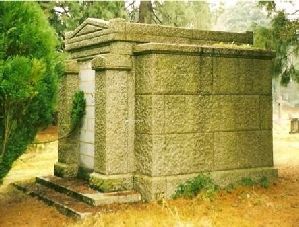 The door and roof require attention. The 1930s stained glass was smashed years ago - it may have been by Tiffany. The state of the roof and interior are unknown. 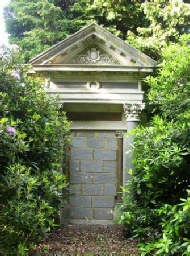 The door has the family name cast in it. The roof requires attention, as does the doorway. This mausoleum is well-sited since it forms part of a vista as seen from the opposite end of St Jude's Avenue. The state of the interior is unknown. 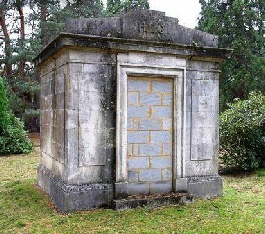 Very little is known of this building. The door is believed to be wooden. The state of the roof and interior are unknown.

Very little is known of this building. It is one of very few in the Egyptian style at Brookwood. The boundary hedge requires trimming to make the building visible again. The state of the roof and interior are unknown. 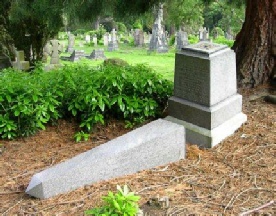 Engineer and designer of prisons, Jebb died in 1863. This large granite obelisk is in danger of falling over and needs to be set upright again.

Note: Since this list was compiled in 2000, the obelisk has fallen over. 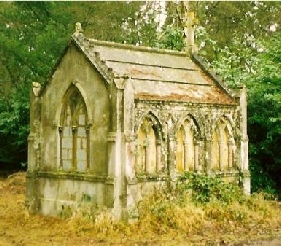 Gothic style. This building used to have stained glass windows and the cast iron door has the family name cast upon it. The coffins are above ground level which may complicate any restoration work.

This obelisk is gothicised and the design is certainly unique at Brookwood. The obelisk has somehow shifted on its base, whilst the pedestal is also out of true. Unfortunately the inscription panels are starting to lift, so any remedial work would need to take possible damage to these panels into account. 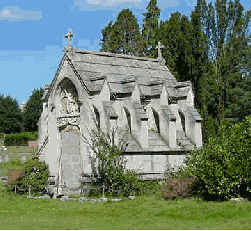 This mausoleum commemorates the founder of London's Cafe Royal (Daniel Nicols, died 1897). The wooden door and the windows need restoring, along with the interior.

The door and interior would need restoring. The roof may need attention. The bronze plaque commemorating the artist Henrietta Normand (nee Rae, died 1928), needs replacing since it has been stolen. 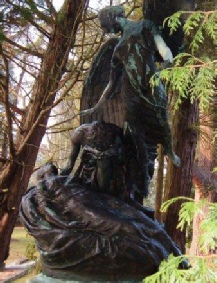 Probably the most important memorial at Brookwood. It commemorates Lord and Lady Pelham-Clinton, members of Queen Victoria's personal household. The bronze is an early and remarkable example of the Victorian celebration of death. The inscription panels on the base are missing, as are the chains around the grave space. The whole sculpture group is starting to lean forward, and requires setting upright. The surrounding trees may require pruning since these have been allowed to mature around this memorial. 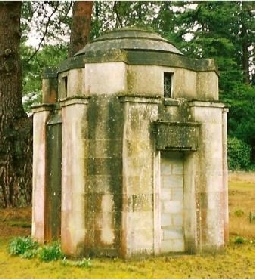 Small mausoleum that contained the ashes of Weatherley Phipson (died 1909) in a fine porcelain(?) urn placed on a shelf opposite the door. The interior has been vandalised and the urn smashed. The current state of the interior and the roof are unknown.

A circular plot containing many interesting graves. This area might provide the core of a restoration of the cemetery landscape back to its Victorian finery. The Ring might be tidied up, memorials repaired and cleaned, and some of the planting restored (eg: replacing the ring of monkey puzzle trees). 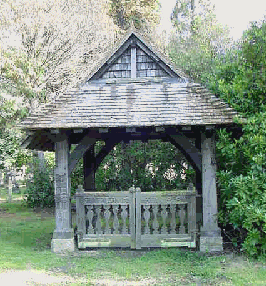 Erected as a memorial to a parishioner who dies in 1892, this most attractive structure could be repaired and restored to its original condition. Some tiles need replacing, but generally speaking the structure appears to be sound. 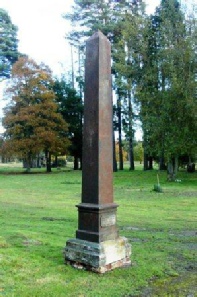 The only surviving pair of unusual cast iron obelisks that marked the burial grounds of St Anne's Soho (Westminster). They require setting upright and one requires some attention at the top, whilst the plates at the bases (which identified the parish ground) are missing. They should be restored to their original sand colour, so they appear to be made of stone rather than cast iron. 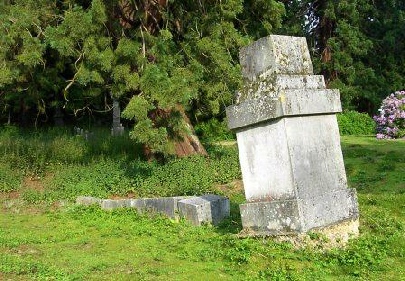 It was erected over the plot where reburials from the church in London were placed in 1899. Unfortunately the plot has sunk over the years and consequently the obelisk has toppled over. The ground should be levelled and stabilised, and the obelisk rebuilt. 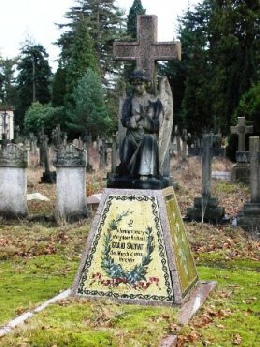 Guilio Salviati died in 1898, and this remarkable memorial was erected to his memory. The base, supporting an angel figure, has four separate mosaic panels. Each is showing signs of damage from damp, moss, and similar ageing. Each panel is of the highest quality of craftsmanship. The memorial used to have some sort of cast iron decorative fence to it, but it is not known what the exact design was.

This tiny mausoleum has been vandalised in the past and requires restoration and renovation. It is believed the coffin(s) are stored above ground which may complicate restoration work. 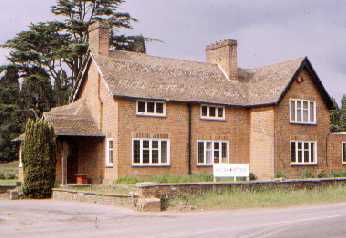 The core of this much-altered building, with the two chimney stacks, is the original “Parsonage House” constructed for the opening of the cemetery in 1854. Smirke was architect to the London Necropolis Company, the founders of Brookwood Cemetery. The company's chaplains disliked the cottage and it was subsequently occupied by the Cemetery Superintendent. The porch and gable fronted extension are later additions. The structure has been renovated and altered (eg a replacement roof destroying the original decorative tiling) with the adjacent office development.

(Note: since 2000, the developers of the office site sold this building. It is now a private house called “The Lodge”, and outside the scope of Brookwood Cemetery Ltd.)

Unique memorial with unusual terracotta base and relief profile portrait of the deceased on top (van Laun died in 1896). Some general renovation of the memorial is required. 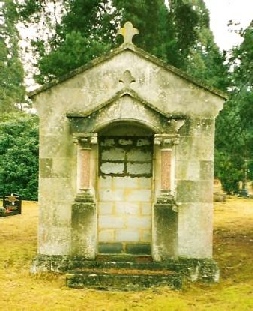 Apparently quite sound from the exterior, nevertheless it may well require attention to the roof and interior. 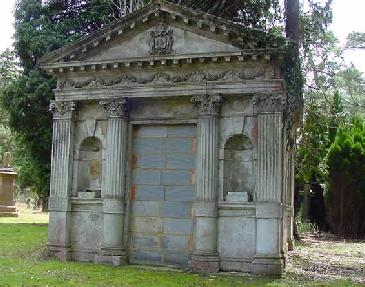 Classical style mausoleum which requires fairly extensive repairs. The roof is damaged and parts of the stone decoration on the walls has decayed badly. The coffins are stored above ground which may complicate restoration work. The glass window at the rear has been smashed (although it is bricked up). The family at one time lived at nearby Ottershaw Park, so this mausoleum is of considerable local interest.

The Brookwood Cemetery Society is currently seeking estimates for repairs to the roof.