The massive operation to rebury 50,000 bodies from the St James’s Gardens burial ground alongside Euston Station offers an opportunity to review earlier reburials from this site. Interest in this project has increased through the BBC2 series “Britain’s Biggest Dig” which was broadcast between 15 and 29 September. Press releases were issued by HS2 and Woking Borough Council concerning the reburials and the television series. The three BBC programmes went “behind the scenes” of the excavations at Euston and Birmingham, since both locations involve the disturbance of disused burial grounds. 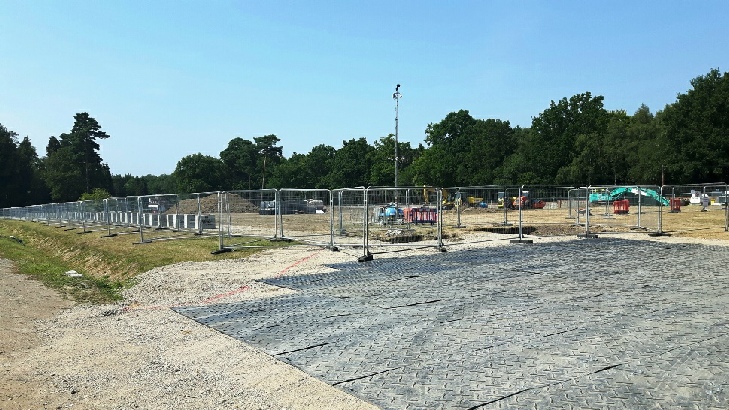 The HS2 plot at Brookwood, August 2020, showing the preparation of the ground.

The original burial ground belonged to St James’s, Piccadilly, which obtained an Act of Parliament in 1788 for its formation. The Act also provided for the erection of a chapel in the graveyard. The original site was four acres in extent, but under the London & North Western Railway’s (LNWR) Act of 1883, the LNWR acquired over an acre in order to extend Euston Station. The work for this is described below. In due course the Vestry of St Pancras obtained permission to acquire the burial ground and lay it out as a public garden. These gardens – St James’s Gardens – were formally opened in August 1887. [1]

The earliest reference to reburials resulting from the expansion of Euston Station dates from the 1880s. Due to the continuing growth of long distance railway traffic, the LNWR wished to expand the western side of the station to accommodate this. Under powers granted by its Act of 1883, the LNWR purchased enough land to enable the station to be doubled in size. It was a major project lasting five years from 1887, involving the diversion of Cardington Street through the burial ground of St James’s. The LNWR was very aware of the need to take great care with the removal of the dead and so avoid the outcry that had arisen during the construction of St Pancras Station in 1866. [2]  Each body was provided with a new coffin and was then reburied in a special plot in the St Pancras cemetery at Finchley. As William Acworth recorded,

“A considerable portion of the site was formerly a churchyard, which was used for burials from the year 1620 down to as recently as 1859. The whole of this cemetery to depth of fifteen feet has now been bodily (one has no wish to jest on such a subject, but the word is indispensable) removed to Finchley; All the time this operation was being carried on by the contractor, a doctor and an inspector were constantly present at either end on behalf of the Company, to see that nothing was done which might offend against either due reverence for the dead or due regard for the health of the living” [3] 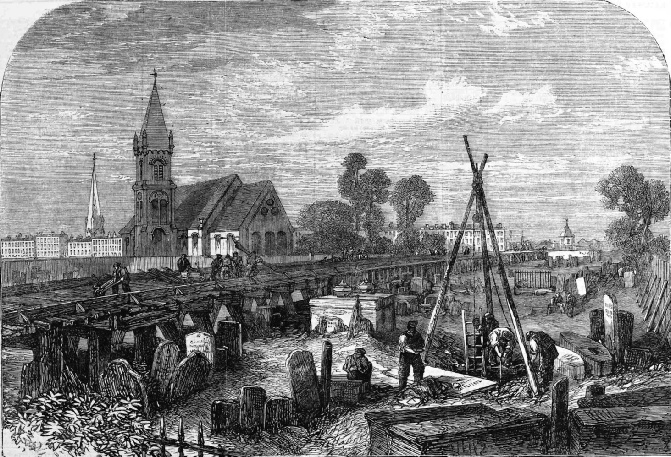 Railway works in St Pancras Churchyard, 1866. Due to the public outcry at the way the deceased were treated, the exhumations caused by extending Euston Station in 1887-92 were carried out very differently, as described above.

The next stage in the story involved a red herring. HS2 has been very transparent in posting information about the excavations on its website, and I noted that one page referred to reburials from the St James’s Gardens site being sent to Brookwood in the 1940s. I was unaware of this, so I contacted HS2 for further information. As the London Midland & Scottish Railway (LMS) had planned to rebuild Euston in the late 1930s (their plan was delayed by the outbreak of war in 1939), I wondered if some preliminary work had begun. If so, this may have involved the disturbance of human remains. However, it transpired that HS2’s statement was incorrect, and the web page was edited to remove all reference to this.

The next disturbance came, not in 1940 as explained above, but in the 1960s. At that time Euston was completely rebuilt under British Railways. This was part of a major rebuilding of the West Coast Main Line. The project included electrification and many other improvements to permit train speeds of 100mph and over. Similar to HS2, the preliminary work for this project involved further encroachments of the St James’ burial ground. This time the chapel, which served the surrounding burial ground, was demolished. The work took place during the summer of 1964. All the inscriptions on the tablets in the chapel were recorded. The tablets were then carefully packed in crates and deposited in the Diocesan store. [4]  The coffin plates were also recorded for the burials in the vaults beneath the chapel. 474 cases of human remains were then removed to Brookwood. However in addition, a further 428 identifiable human remains were reburied in private graves. The whole task cost nearly £19,500.

However it remains far from clear in what form these 428 individual reburials took place. It seems unlikely they were buried en masse since this would be at odds with the definition of a private grave. I have never located any of these graves - assuming they were marked (as private graves should be). Nor do the burial registers throw any light on these additional graves or where they might be located.

Equally unclear is where the 242 cases of human remains were buried. There appears to be no permanent marker or monument to identify them, meaning this is one of several reburial projects without an identifiable site at Brookwood. Although in the new edition of my cemetery guide, London’s Necropolis, I suggest they were buried off lower St Pancras Avenue, I now believe they were buried off lower St Mark’s Avenue. In either case I have failed to identify any evidence of either set of human remains. 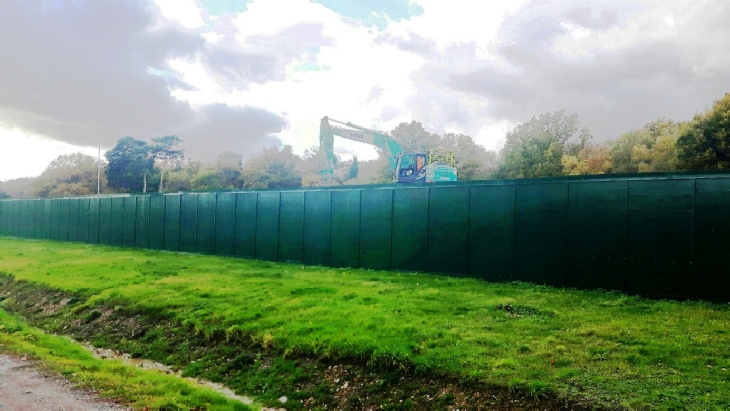 The HS2 plot at Brookwood in October 2020, showing the wooden screen surrounding the entire area.

No such mystery will surround the location of the current reburials. The number of human remains, estimated at 50,000, means this will be the largest operation of this nature ever to take place at Brookwood. It recalls the reforming nature and ethos behind the London Necropolis Company. For its promoters hoped to improve the manner of burying the metropolitan dead. In doing so they hoped that as more and more overcrowded and pestilential London burial grounds were closed, the human remains would be removed to the ample acres at Brookwood. 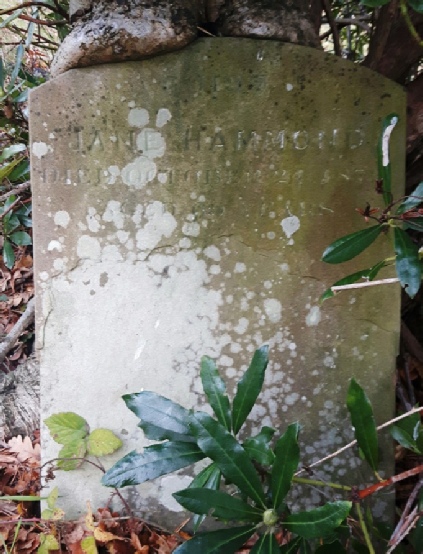 The plot selected for the HS2 reburials was previously used - at least in part - for burials from the Asylum at Brookwood. Evidence of this remains in the small headstone located near the car park by the Society’s Lodge commemorating the life of Jane Hammond. [5] This memorial faces towards the area being prepared for the reception of human remains. In the 1970s this whole area was dense woodland.

The memorial to Jane Hammond, who died at Brookwood Asylum in October 1872.

HS2 confirmed that the remains will be buried in earth rather than being entombed in some form of concrete chamber. This option is sometimes used as alternative method of reburying human remains.

A few years ago, Brookwood narrowly missed being the final resting place of human remains disturbed by the Thameslink viaduct project around Borough Market. The archaeological investigation was undertaken by Museum of London Archaeology (MOLA). During the works involved in this infrastructure project, the remains of over 330 people were removed from the site of the former burial ground in Park Street. This had served the St Saviour’s Almshouses, otherwise known as Cure’s College. Brookwood would have been an appropriate choice for these reburials given that for many years it buried the dead from the parish of St Saviour’s and also received the human remains from the Cure’s College Burial Ground. The site of these almshouses, also in Park Street, were displaced by the construction of the Charing Cross Railway in 1862-3. In the event Network Rail awarded the contract to F. A. Albin & Sons, whose main offices were close to the site. In the summer of 2012 the remains were reburied in a special plot in Kemnal Park Cemetery near Sidcup.

[1] Survey of London: Vol. 21: the Parish of St Pancras, Part 3, pp. 123-136. All the volumes in this series are available via the British History Online website at https://www.british-history.ac.uk/search/series/survey-london

[2] During the construction of the approaches to St Pancras, part of the burial ground of Old St Pancras Church had to be cleared to make way for the railway. Human remains, which existed to a considerable depth, were initially shown little respect by the contractors. An outcry in the press led to more care and consideration being shown to the deceased prior to their reburial elsewhere. The person in charge of the excavation of the churchyard was the young Thomas Hardy.

[4] Details of the tablets from the chapel are also given in the Survey of London, Vol. 21, cited above. The current whereabouts of the original tablets is unknown.

[6] Jane Hammond died on 24 October 1872 at the Asylum. On the memorial her age appears to read 69 years, but according to the cemetery registers she was aged 76 years, whilst the FreeBMD website (https://www.freebmd.org.uk) gives her age as 70 years.