This page advertises the removal of rhododendrons throughout the former Church of England sections at Brookwood, and my objections to this programme. Here you can read:

The article from the “Woking Advertiser” dated 6 May 2016

Further Comments on Rhododendrons at Brookwood - May 2016

Since Woking Borough Council failed to reply to my concerns about its policy of removing all the rhododendrons in the southern section of Brookwood Cemetery (sent to Kevin Davis, Councillor for Brookwood on 5 April), I wrote the following letter to the Editors of the Woking Advertiser and the Woking News and Mail on 27 April.

“May I draw your attention to the destruction of the historic landscape of Brookwood Cemetery currently being undertaken by Surrey Wildlife Trust (SWT) on behalf of Woking Borough Council? I complained to the local councillor about this work over three weeks ago and am still awaiting a reply.

“SWT is undertaking the complete removal of rhododendrons throughout the southern (former Church of England) sections on the grounds these shrubs are “non-native, invasive species and the purpose of removal is to allow native ground vegetation to flourish”.  The rhododendrons are being removed down to ground level. This is utterly transforming the landscape of the cemetery. Had this work been undertaken by the late Ramadan Guney I’m sure the Council would have acted at once to prevent it.

“The argument for their removal is entirely spurious. There is ample photo-graphic evidence that rhododendrons have been a major feature of the cemetery landscape for at least 120 years. In many cases the London Necropolis Company planted them to provide privacy and seclusion for many community plots scattered across the grounds. In many cases the communities involved paid for them to be planted and laid out in this way. In many cases families chose to plant them to adorn the setting of family graves. They were as much a feature and attraction of the cemetery, much as the famous rhododendron avenues at Jackman’s nurseries at Goldsworth used to be. 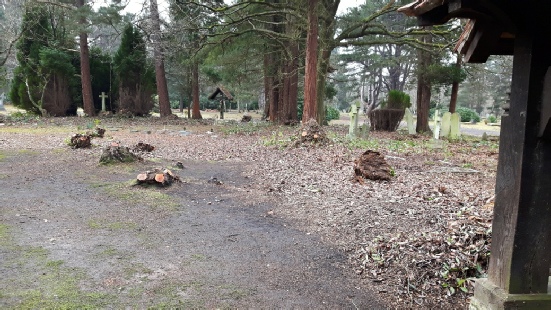 The St Alban’s burial ground at Brookwood after the removal of all the rhododendrons that once screened this private plot.

Already the special setting of the St Alban’s burial ground – once private and secluded – has been utterly destroyed by this devastating programme of “clearance”. The areas allotted to the Order of  Reparation, St Peter’s Home, the Woking ground, and St Stephen’s Kensington will be ravaged in a similar way.

“The result is an alien landscape. SWT – and I assume Woking Borough Council - seems bent on “restoring” the “original” landscape of Brookwood Cemetery which was formed from virgin Surrey heathland. In so doing they have ignored the subsequent development of the landscape by the London Necropolis Company into what Pevsner described as “a sombre complex landscape, unlike anything else in the county”. The very Victorian cemetery I knew as a teenager in the 1970s is fast disappearing.

“To their shame neither English Heritage nor the Brookwood Cemetery Society has commented about these developments. Assuming both bodies agree with this draconian clearance, surely this not only calls into question the Grade I status of the cemetery but the Council’s “management” of the site?” 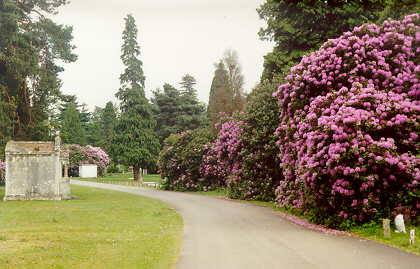 A typical display of rhododendrons at Brookwood in the 1990s. Now it seems they will be a rarity in a place they have graced for so long. I believe some of the species are quite rare, yet all will disappear shortly.

Removal of Plants is ‘detrimental’ to Cemetery

AN author and expert on Brookwood Cemetery has expressed concerns over the removal from plants from the burial ground.

John Clarke has been visiting the cemetery since he was a teenager and said he felt the removal of rhododendrons throughout the southern side of the site was destroying the historic landscape.

The 56-year-old said work being undertaken by Surrey Wildlife Trust (SWT), on behalf of owners Woking Borough Council, was ‘utterly transforming’ the landscape of the cemetery.

SWT said ‘a few select bushes will be left to enhance the landscape’ but that it posed a threat to other ‘rare’ fauna on the site.

“There is ample photographic evidence that rhododendrons have been a major feature of the cemetery landscape for at least 120 years,” Mr Clarke said. “In many cases the London Necropolis Company planted them to provide privacy and seclusion for many community plots scattered across the grounds. In many cases the communities involved paid for them to be planted and laid out in this way and families chose to plant them to adorn the setting of family graves.

“They were as much a feature and attraction of the cemetery, much as the famous rhododendron avenues at Jackman’s nurseries at Goldsworth used to be.”

Brookwood Cemetery was founded in 1852 by the London Necropolis and National Mausoleum Company to provide a final resting place for London’s dead. The site was sold to the Commonwealth War Graves Commission in the 1920s to accommodate the Commonwealth victims of the First World War. [Sic]

In 2014, Woking Borough Council became the owners after purchasing shares in companies that used to own the site.

“Already the special setting of the St Alban’s burial ground - once private and secluded - has been utterly destroyed by this devastating programme of ‘clearance’, he said. “The areas allotted to the Order of Reparation, St Peter’s Home, the Woking ground, and St Stephen’s Kensington, will be ravaged in a similar way. The result is an alien landscape.” 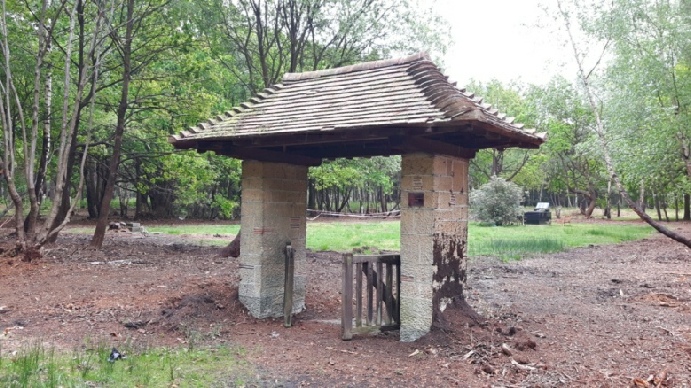 St Peter’s Home Ground: where are the covered headstones the Cemetery Society alleges are the reason for the clearance of rhododendrons at Brookwood? The lych gate now stands as an incongruous and isolated feature because the surrounding rhododendrons have been completely eradicated, thus destroying the setting of another burial plot in the cemetery.

Isobel Girvan, principal ecologist for the trust's ecology services, said: “The rhododendron management at Brookwood Cemetery will allow the restoration and expansion of an unusual acid grassland and heathland habitat that is home to many notable species such as invertebrates, for example solitary bees, reptiles such as slow-worms and plants including sheep’s sorrel and heather. A number of best example rhododendron trees and bushes will be retained in order to augment the picturesque scenery that the cemetery provides.”

Kim Lowe, secretary of Brookwood Cemetery Society said the removal would not be ‘detrimental’ to the cemetery. “Any rhododendrons that are coming down are ones that have covered headstones up for so many years. Some are starting to spring back up. In the long run it will improve it.”

However, Mr Clarke, who now lives in Surbiton, said in attempts to restore the original landscape of the site, SWT were ‘ignoring’ the subsequent development of the landscape by the London Necropolis Company. “The very Victorian cemetery I knew as a teenager in the 1970s is fast disappearing,” he said.

Ian Tomes, Woking Borough Council's strategic asset manager, said: “Throughout its unique history, Brookwood Cemetery’s landscape has continually evolved. During the past decades, however, the rhododendrons have been left unmanaged and have grown into dense thickets, which was never the intention of those who planted them. If left they would spread across the entire cemetery, impacting the important ecology of the site and preventing access to graves.” 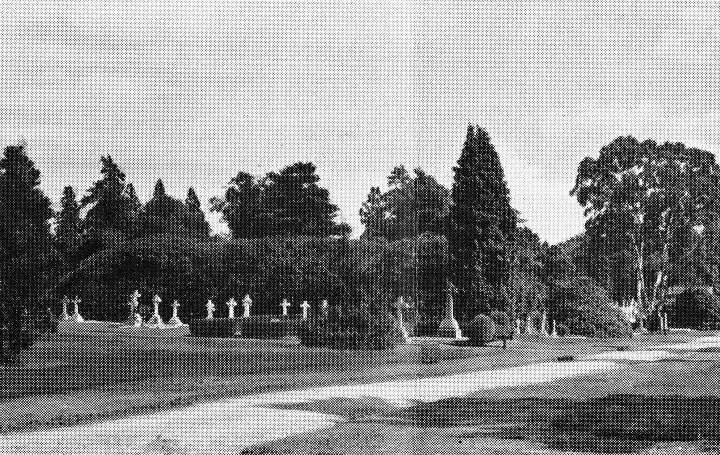 A typical rhododendron ‘island’ in Brookwood Cemetery, from a brochure published by the London Necropolis Company in the 1960s.

In 2017 the clearance of rhododendrons began in the former Nonconformist sections of the cemetery. This appears to have prompted further complaints about the work as can be read in this article from the Woking Advertiser dated 14 September 2017.

Further to your article on the removal of rhododendrons at Brookwood (“Removal of plants is detrimental to cemetery”, your 6 May edition), may I be permitted to comment briefly on the responses you received?

Surrey Wildlife Trust admits only “a few” rhododendrons will remain in the Church of England sections once this clearance programme is completed. Readers should be aware the bushes are being cut down to ground level across the site. I note that Surrey Wildlife Trust’s reasons for this cull are justified on the grounds of wildlife rather than the “restoration” of the historic landscape at Brookwood. Surely this is in direct contradiction of English Heritage’s upgrading Brookwood to a Grade 1 Historic Park and Garden? This is a radical departure: the cemetery is primarily there for the deceased and their families; whilst the landscape is crucial to this setting, as the London Necropolis Company knew.

The Council’s response suggests they now have carte blanche to undertake any changes they wish at Brookwood and without restriction. This does not bode well for the future given the Council’s past record. For instance, in 1998 the Council allowed the intrusive development of the “Red House” office complex on Cemetery Pales. In the words of the then County Archaeologist,  “[thus] destroying an important historic landscape”. QED.

Finally, if the Brookwood Cemetery Society really believes the clearance is only being undertaken to expose otherwise overgrown graves, why was the St Alban’s ground desecrated in the way it has been? The Society’s attitude is misguided and I regret the Society – which I helped found in 1992 - has ended up as Mr Tomes’ poodle. 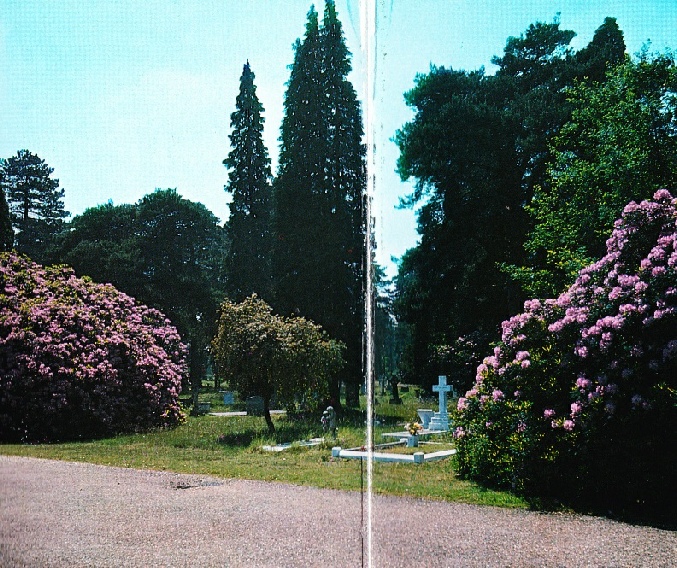 Rhododendrons at Brookwood, from a company brochure published in the 1970s.

Here I quote from a London Necropolis Company brochure of c1904, which states, “the gorgeous masses of rhododendrons that make such a brave show in the early summer are in perfect harmony with the surrounding scene ... indeed, there is not a more beautiful cemetery in the whole world.”

The fact the brochure refers to “gorgeous masses” indicates that rhododendrons were already well-established across the cemetery by 1900.

The Burial Society of St Alban’s minuted that “significant planting of rhododendrons” around the St Alban’s plot took place in 1898 and 1911.

I am not aware the Surrey Wildlife Trust has undertaken any evaluation of the scarcity of any of the species of rhododendron at Brookwood. Nor did they make any reference to any such assessment in their response to the “Woking Advertiser”.

I believe that the complete removal of the rhododendrons at Brookwood will result in future problems with flooding. The water table at Brookwood is high, and I understood the Council was well aware of this following its purchase of the 10 acres surrounding the old cemetery cottage off Long Avenue. I believe one reason why the London Necropolis Company planted rhododendrons was to help soak up groundwater. A wet winter or two will prove this theory one way or the other, although by then it will be too late.

It is interesting to compare and contrast the difference in approach to rhododendrons between the Council and the Commonwealth War Graves Commission. Over in the military cemeteries, rhododendrons are thriving - and long may they do so. 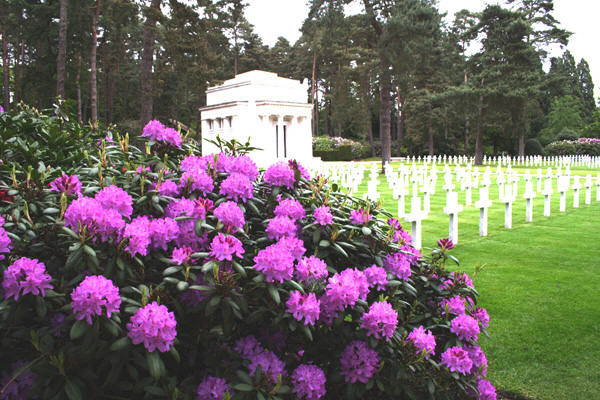 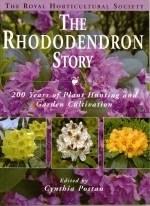 The group posts additional information and data about rhododendrons on its webpage, along with access to The Rhododendron Story: 200 Years of Plant Hunting and Garden Cultivation, edited by Cynthia Postan.

Published in 1996 to celebrate half a century of the Rhododendron Yearbook, this publication gives a marvellous insight into the world of rhododendrons and the people who helped create it. Although out of print, the book can be read via this link.