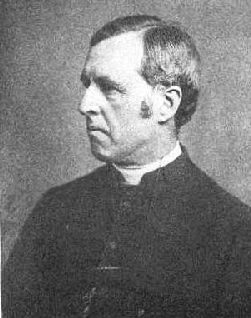 ALEXANDER HERIOT MACKONOCHIE (1825-1887) was a priest and the first vicar of St Alban the Martyr, Holborn.

The Rev. Alexander Heriot Mackonochie long held the foremost position among the most advanced clergy of the Ritualist party, and attracted to himself the warmest love and devotion of that section of the Church. Rev. Mackonochie was educated at Wadham College, Oxford, where he took his degree in 1848. His name appeared in the second class of classical honours, while those of Mr. E. St. John Parry and a future Bishop of Chester were in the first class. In 1849 he was ordained deacon, and in the following year priest, by the Bishop of Salisbury.

Three years were then spent between the curacies of Westbury, in Wiltshire, and Wantage, in Berkshire. Then, in 1857, he was transferred to London. His lot was cast in the parish of St. George’s-in-the-East, of which Rev. Bryan King was rector. One peculiarity of the parish was that the congregation had the right, to the exclusion of the rector, of naming both churchwardens. These gentlemen, as might have been expected, were both bitterly hostile to the proceedings of the rector and his curates. In point of fact, the ceremonies which were denounced on so many platforms at the time were only ritualism in its infancy, and the service as carried on in the church of St. Georges-in-the-East would now be thought less ornate than that of many a village church. The clergy were backed by a choir, who gave their services voluntarily, and by a knot of men who made a point of visiting the church every Sunday and doing their best to shield the clergy from violence. But on the other side were the churchwardens and the congregation, or rather the parishioners, to a man. We need not describe the painful scenes of riot that ensued. The hopeless struggle was carried on for some time. The churchwardens appointed a lecturer at the church, who was of the exactly opposite school to the rector, and this step only inflamed the animosity already existing, and the clergy, who had carried on the contest with firmness and good temper, were almost glad to be relieved of their duties.

Bryan King was in 1863 appointed to the vicarage of Avebury, in the diocese of Salisbury. Rev. Mackonochie, in 1862, was chosen as the first incumbent of the new church of St. Alban the Martyr, which had just been built at the expense of Mr. John Hubbard, now Lord Addington. Here at least Rev. Mackonochie had no mob to deal with. The parish was almost as poor as that which he had just left, but the parishioners were for the most part of a different character. His clergy house soon came to be regarded as the place where all could find relief and comfort in their troubles, physical and spiritual. This living Rev.  Mackonochie held for 20 years, during which he gave his taste for high ritual the fullest scope. So far did he go that Mr. Hubbard, the Founder of the church, publicly protested against the proceedings of the incumbent. Protests, however,from whatever source they came, had little effect on Rev. Mackonochie.

But the “aggrieved parishioner” was set in motion, and for some years the Courts were full of the case of “Martin v. Mackonochie”. It was understood that the proceedings were taken by the Church Association. Rev. Mackonochie systematically set the decrees of the Courts at naught; and the trouble was only brought to an end by an exchange of livings between Rev. Mackonochie and the Rev. R. A. J. Suckling, vicar of St. Peter’s, London Docks. This exchange was made with the approval of the Archbishop of Canterbury, Dr. Tait, and the Bishop of London, Dr. Jackson, both of whom, though by no means willing to sanction what they thought his extreme ritual, had learned to respect him as a high-minded, conscientious, hard-working man. He did not stay long at St. Peter’s, as he was again attacked by the Church Association.

His health had long been failing, and a telegram was received on Saturday night at the St Alban’s Clergy-house announcing his death while on a visit to the Bishop of Argyll. Following this news, Fr. Russell, one of the curates of St. Alban’s, made a hasty journey to Scotland, and on his arrival sent the following telegram from Ballachulish to his colleagues at St Alban’s:—

“He went Thursday morning to walk to head of loch, ten miles off, with two dogs, deerhound and terrier. Snowstorm came on and darkness, lost trail, wandering miles up into mountains, lay down, dogs watched two days and nights; would not let searchers approach. Found 17 miles from home, head frozen into snow. Hat off. Lies in Bishop’s chapel; no trace of suffering upon face. I start early to-morrow as no boat to-night. Arrive at Euston early Wednesday. Will telegraph exact time from Oban to-morrow. Bishop tied here by duty, greatly regrets cannot come.”

“On Wednesday last Rev. Mackonochie walked up Loch Leven side and evidently enjoyed it, for on Thursday morning he said he intended to take a much longer walk. He left at 8 o’clock, having a deerhound and a terrier with him. He passed Kinlochmore lodge about noon and was seen by one of the keepers going in the direction of the bridge. As he did not return to Aultshellach house in the evening some alarm was felt, and a party was sent as far as Kinloch to make inquiries, but nothing was known beyond that he had been seen passing at noon. The night was very stormy. On Friday a large party from North Ballachulish, accompanied by the Bishop of Argyll, went up and, accompanied by all the shepherds and keepers, searched the hills in all directions, continuing the search all night an 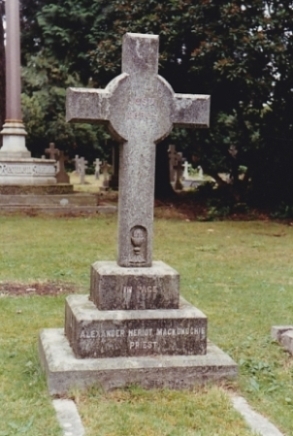 d up to 2 p.m. on Saturday, when they were about to give up the search in that part of the forest. But as Hugh M’Coll and Duncan M’Coll, jun., of Kinloch, were crossing a wire fence they noticed the deerhound sitting beside a snow wreath in a hollow close to the fence, and on going over they found the body lying in the hollow and the two dogs beside it. The Bishop and the rest of the party were hailed and arrangements were made for carrying the body home from the glen. It appears that Rev. Mackonochie, after passing Kinloch, had gone along the road six miles, and when darkness set in he must have lost the road, for he had gone about a mile and a half off the path up the hillside, and, having come to a wire fence, he evidently had followed it until he came to the hollow, which was surrounded by a heavy wreath of snow, over which he could not go. The hollow was very much trampled, apparently by Rev. Mackonochie walking round and round, until, becoming exhausted, he lay down with his hand under his head. When found, the head and shoulders were covered with snow. The body was taken to Aultshellach house that evening and will be removed to England.”

The funeral service was held in the church which is identified with his name, St. Alban the Martyr, Holborn, and the interment took place in St. Alban’s ground at Brookwood.