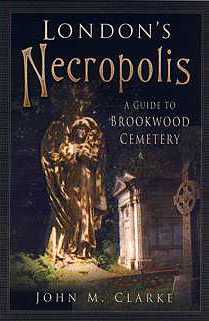 A Guide to Brookwood Cemetery

Published by Sutton Publishing in April 2004

Hardback, with 300 pages, and over 130 illustrations

Note: this edition has been out of print for many years.

It was replaced by the second edition of 2018.

Brookwood was the largest burial ground in the world when it was opened in 1854 by the London Necropolis & National Mausoleum Company. Designed on a massive scale with avenues of sequoia, its own private railway and majestic planting, Brookwood is one of Surrey’s best-kept secrets.

The cemetery contains nearly 235,000 burials and is still privately owned and administered. A recent Home Office Report suggests it has the potential to become a World Heritage Site.

London's Necropolis provides a history of the London Necropolis Company, a guide to the art and architecture of Brookwood Cemetery, and also includes brief biographies of over 800 individuals of interest who have been buried there, reflecting all levels of a lost society.

Each chapter is supported by maps, and there are nearly 140 black and white photographs and line drawings to illustrate some of the most interesting memorials and cemetery buildings.

Some reviews of London’s Necropolis

“Clarke’s book is a comprehensive guide ...”

"John Clarke has been investigating Brookwood Cemetery since 1976 (almost too late) and ... has done a splendid job (as far as is possible) in giving us a history of the London Necropolis & National Mausoleum Company and its Surrey cemetery. ... Clarke's book is a comprehensive guide with much information about who is buried there, the monuments and much else."

“any researchers with middle class ancestry in Victorian London may find this book of considerable interest.”

"John Clarke's guide to Brookwood is a functional journey through those avenues of sequoia and rows of graves ... and any researchers with middle class ancestry in Victorian London may find this book of considerable interest"

"Suggestive of the infinite and compelling variety of both death and life, this marvellous book is an essential addition to the literature of London's cemeteries."

"John Clarke has ... an encyclopaedic knowledge of Brookwood.”

"John Clarke has ... an encyclopaedic knowledge of Brookwood. The extent of his research is admirable. ... The book is well illustrated with maps which are immensely useful given the huge size of the site ... This book is an invaluable companion for anyone visiting Brookwood."

You can read some more reviews here.