“Shipping Wonders of the World” 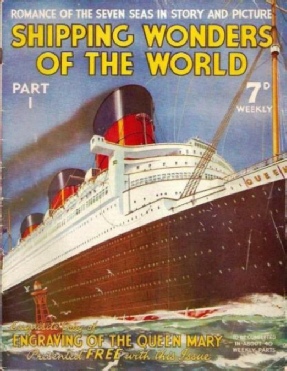 This page offers additional information about Shipping Wonders of the World as a publishing project. It is intended as a short essay describing the work as a whole.

Shipping Wonders of the World was published by the Amalgamated Press in 1936-7. It was the second of several part works issued by them under the editorship of Clarence Winchester.

The series was launched at a good time for British shipping, with the first issue featuring a long article on the recently completed RMS Queen Mary, supported by a photogravure supplement and an engraving of the liner by Frank Mason. Further articles on this “super liner” appeared in subsequent issues.

One oddity - to modern eyes - is the part work was not designed so that articles fitted the confines of each issue. Few weekly parts end this way and virtually all end unfinished, with the article being completed with the next issue. The exception is part 26, which completed volume 1. This method may have been a ploy to sell two issues rather than one, since if an article of interest appeared at the end of one issue, the reader would feel obliged to buy the next issue to complete the story.

Although much of the content is devoted to British shipping, both contemporary and past, the overall emphasis was international in scale and scope. As Clarence Winchester declared in the foreword to the series, “it sets out to be the most comprehensive work on the subject yet published”.

As the series completed, a casebinding service was offered. The style chosen was in the usual Amalgamated Press “house style” of a lettered and illustrated spine, with a design impressed into the front cover with the title of the series.

For Shipping Wonders of the World the standard casebinding offered was in a rich blue cloth. The spine of each volume carried a different maritime vignette (a sailing ship for volume 1, a liner for volume 2), the title of the series, the volume, and the pagination. The front cover had a design incorporating a sailing ship.

This was offered as a two-volume set. The binding service removed the outer covers of the weekly parts, so the series was bound with all the appearance of two hardback books with a continuous pagination throughout each volume.