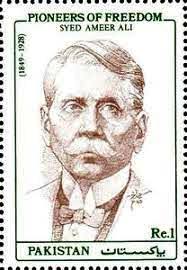 The Right Honourable SYED AMEER ALI (1849-1928), was a great Muslim leader and interpreter, and as the first Indian member of the Privy Council and its Judicial Committee.

Syed Ameer Ali was entitled to the prefix “Syed”, for he was an Arab by race, tracing direct descent from the Prophet. The family was long settled in Persia, and it was the jurist’s great-grandfather who joined the army of Nadir Shah when he invaded India in the middle of the 18th century. He settled as a landowner at Mohan, in Oudh, where Ameer Ali, the fourth son of the late Syed Saadut Ali, was born on April 6, 1849. He graduated from Hooghly College, Calcutta, in 1867, and came to London with a State scholarship for study at the Inner Temple, being called to the Bar in 1873.

In those days the Indian student community was small enough for its members to be conspicuous, and the young man formed some influential friendships. He also published the first of his Islamic works, entitled A Critical Examination of the Life and Teachings of Mahomed. Both as the first detailed essay in English in apologetics by a Muslim, and for its mastery of English, the book was a great achievement for a man aged only 24. It was followed in 1889 by his erudite A Short History of the Saracens, and in 1893 by The Spirit of Islam, both of which were brought out in new editions. Along with his Ethics of Islam (1893) these writings give him a permanent place in English literature as an interpreter of the Islamic Code, antiquities, and history on the lines of progressive thought.

Professionally, Ameer Ali prospered. After a short period of practice at the Calcutta Bar, he was appointed one of the stipendiary Presidency magistrates and acted on several occasions as the Chief

Magistrate in the city. Resuming his practice in 1881, he quickly rose to prominence. In 1884 the University elected him to the Tagore Professorship of Law. On the basis of his lectures he published

an exposition of Mohammedan law (The Law Relating to Gifts, Trusts and Testamentary Dispositions Among the Mahommedans, 1885) and a students’ handbook (Student’s Handbook Of Mohammedan Law, 1891). He was also joint author of a work on the law of evidence in British India and of a commentary on the complicated Bengal tenancy law. These books went through several editions and for long have been recognized as standard works. In 1890 he was appointed a Judge of the Bengal High Court, being the first Muslim to reach such a position in India. His judgments were marked by care and erudition. One of them, relating to Muslim wakfs (religious endowments), is still well remembered, and was the starting point of legislation enacted many years later. The Court undoubtedly gained strength by his membership.

After his retirement in 1904 he settled in this country. When Lord Morley opened the door of the Council of the Secretary of State to Indians in 1907, Ameer Ali was disappointed not to be selected

as the first Muslim member. But a position of greater dignity as well as of permanence awaited him. In 1909, on the resignation of Sir Andrew Scoble, Ameer Ali was sworn a Privy Councillor and appointed to one of the unpaid posts on the Judicial Committee, and on the retirement later of Sir Arthur Wilson he received £400 a year, the inadequate sum assigned in 1833 as “expenses” to the ex-members of the High Courts in India promoted to membership of the Judicial Committee. He was the first Indian to be raised to the rank of Privy Councillor, and it was generally recognized that this was a fitting reward for distinguished services rendered. As regards membership of the Judicial Committee, it was also held to be reasonable that an Indian should have a seat on the tribunal administering final justice to millions of his countrymen.

The appointment was justified in its results. Ameer Ali proved himself to be as industrious and painstaking in the final Court as on the Calcutta High Court Bench. An experience limited entirely to the somewhat casual and discursive methods of the Indian Courts is not perhaps the best training for a seat on the Judicial Committee, and the complaint was sometimes made that the Judge interrupted too often. In the last year or two this was due in part to defective hearing. If Ameer Ali sometimes tried the patience of counsel and even of his colleagues during the hearing of appeals, the judgments that he frequently delivered on behalf of the Board were worthy of all praise. They were obviously prepared with great care, and, while exhaustive of the subject matter under appeal, they, cautiously avoided all loose obiter dicta and the discussion of abstract principles that might encourage the parties and others of their race to further litigation. Their literary style, too, deserves notice, and might well have served as a model to some of his English colleagues, while his intimate knowledge of Indian history and custom often illuminated them with an interest unusual in judgments delivered in Indian appeals. Ameer Ali remained the only Indian Privy Councillor until Lord Sinha was raised to the dignity in 1919, and the only Indian member of the Judicial Committee until Lord Sinha’s appointment in 1926.

It was, however, as an Islamic leader that Ameer Ali was best known. He always claimed it to be his chief, ambition in life to advance the Indian Muslims, both morally and materially, along practical and constitutional lines. For some years when an unofficial barrister he was a member of the Bengal Legislature, and later of the Viceregal Legsislature. He established in 1877 the Central National Mahomedan  Association, with branches throughout India, and he frequently expounded in leading reviews in the country the claims of the Indian Muslims to due recognition in appointments to the public services, in representation on local bodies, and in provision for their special educational needs. A Muslim memorial to Government which he inspired and drafted in 1883 led to a resolution of the Viceroy (Lord Dufferin) in Council in March, 1885, recognizing these claims, which constituted a turning point in the history of the community. It paved the way for the formation in the early years of the present century of the All-India muslim League, and for the reservation for representatives of the community of seats in the Legislatures as reconstituted by the Morley-Minto reforms - the latter after a hard fight, in which Ameer Ali took a predominant share. He founded the London branch of the League, and dominated its activities until the machinery in India was captured by the extremist section. Only a few weeks before his death he submitted a statement of his views to the Simon Commission. His interest in affairs was undiminished to the last.

In the Tripoli and Balkan wars Ameer Ali developed keen pro-Turkish sympathies, shown by the promotion of the Red Crescent League, and by letters and articles in the Press on international polities. In the Great War, and after, he gave no encouragement to the aspirations for freedom of the Arab peoples from whom he was descended. He participated in representations to the Prime Minister, and wrote letters to the Press so severely critical of the peace terms with Turkey and of Allied policy generally in the Near East as to call forth repeated protests in the press from Sir Valentine Chirol on the ground that it did not become a member of the Judicial Committee to stimulate unrest among Muslims within the Empire. To these protests no direct answer was returned and the controversy closed with the revision of the Turkish peace terms.

Essentially conservative in relation to Indian polity, Ameer Ali was disliked and feared by the extreme wing. On the other hand, men of old style orthodoxy, and others of fervent Islamic faith, discounted his efforts to secure funds for a mosque in London and other services to Islam as coming from one whose tastes and standards were European rather than Oriental. But his high standing and his cogency in argument enabled him to exercise a great influence. 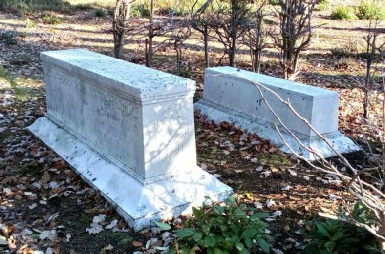 meer Ali received the C.I.E. in 1887, and was an honorary LL.D. of Cambridge University. He married Isabelle, a daughter of the late H. Konstam, and a sister of the distinguished actress, Gertrude Kingston, and of Mr. E. M. Konstam, K.C. They had two sons, of whom served in the Indian Civil Service in the United Provinces, and the younger ran a successful practice at the Calcutta Bar, acting also as Legal Remembrancer to the Bengal Government.

In private life Ameer Ali was held in high esteem by a large circle of English and Indian friends. He was a charming host, and his house in Cadogan Place was for a long time a pleasant, centre of all that was best in the British-Indian world. The position that he had won for himself was unique in the history of his race. He died on August 3, 1928.